Sep 05, 2013
Following a period a local dominance at the hand of four major Korean thrillers, the balance at the Korean box office has become more even over the last fortnight as a number of US titles found their way into the chart. With the holidays over and schools and college beginning classes once again, business slowed somewhat over the period but was still strong. 8.63 million tickets were sold since August 22nd, with local production taking a 2.3% market share.
Coming in at first place during the period was the local thriller Hide and Seek, directed by HUH Jung and starring SON Hyun-ju, MOON Jeong-hee and JEON Mi-sun. It brought in 2,429,68 spectators over the last 14 days, lifting its total over 5.2 million admissions. Entering into a crowded field without a great deal of early hype on the same day as the big-budget epidemic thriller The Flu, the film became a surprise hit, quickly building on strong word of mouth. 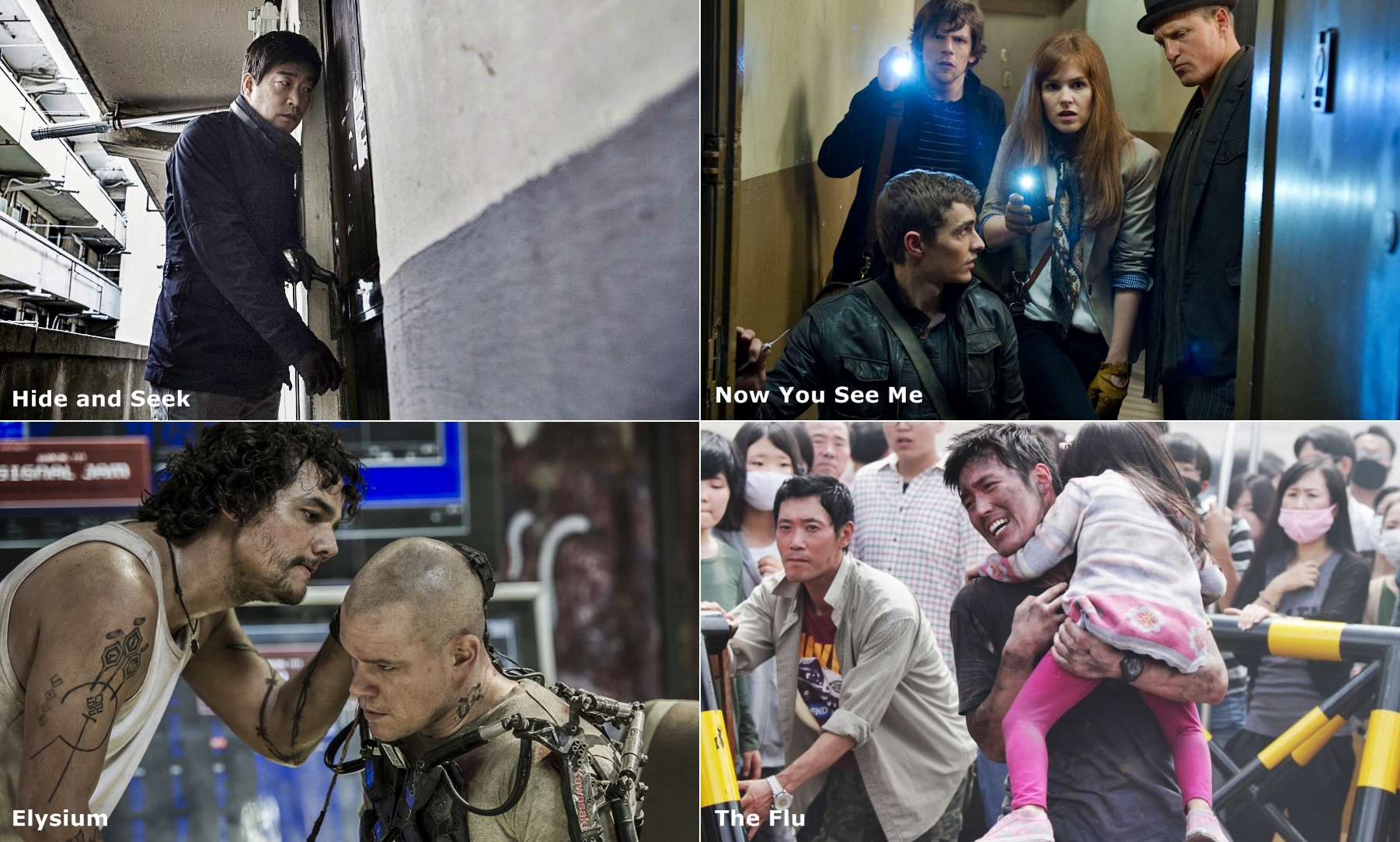 The second place on the chart was occupied by the high concept Hollywood thriller Now You See Me, which put in a strong performance as it amassed 2,309,090 admissions. The magician thriller was the first Hollywood film to break the pattern of local dominance since Red 2 topped the chart in late July.
Elysium occupied third place on the charts after only a week with 892,348 admissions. The sci-fi, starring Matt Damon, opened a little later than it did in other international markets and, following a long summer of US blockbusters and Korean thrillers, it was unable to make a significant impact, only opening at second place over its first weekend.
Staying at number four was CJ Entertainment’s disease thriller The Flu director by KIM Sung-su and starring JANG Hyuk and SU Ae. The film added another 886,913 tickets to its total, which now stands at over three million admissions. Following a strong opening the film was not able to maintain its pace against the ample competition in the field. Given the film’s hefty pricetag (reportedly in the USD 8 million range) its performance leaves something to be desired.
BONG Joon-ho’s blockbuster sci-fi Snowpiercer slid to number five on the chart. It brought in 756,178 over the two weeks and has now made it over the nine million admissions mark. Many speculated that the film would be the second Korean production of the year to edge over the ten million mark (the first was the comedy drama Miracle in Cell No. 7). As the film is almost out of theaters, it now seems unlikely that it will cross the mark but it is already soundly above the breakeven point, which was said to be six million. The film has yet to open overseas but will have its international premiere at the Deauville Ameircan Film Festival on September 7th before opening in France on October 30th.
The Terror, LIVE, another of the major Korean thrillers of the summer, topped the 5.5 million admissions mark after selling another 370,930 tickets. Starring HA Jung-woo, the film opened at the same time as Snowpiercer and found a large audience as a result of strong word of mouth.

The following positions on the top 10 chart were all occupied by Hollywood fare. The Steve Jobs biopic Jobs, starring Ashton Kutcher, landed at number seven after selling 193,879 tickets in a week. The animation Epic followed with 122,430 admissions as it nears the one million mark. The high concept action comedy R.I.P.D. barely made an appearance with only 100,239 admissions. Animation sequel Despicable Me 2 sold 83,289 during previews ahead of its September 12th release, enough for number ten on the chart.
Over the coming weeks a number of big-budget genre films will enter the marketplace to make the most of the Chuseok holiday, which this year lands on September 19th. SEOL Kyung-gu, MOON So-ri and Daniel HENNEY will face off in CJ’s action comedy The Spy: Undercover Operation (September 5th) while SONG Kang-ho, LEE Jeong-jae, BAEK Yoon-shik and KIM Hye-soo all star in HAN Jae-rim’s period film The Face Reader (September 12th).
By Pierce Conran 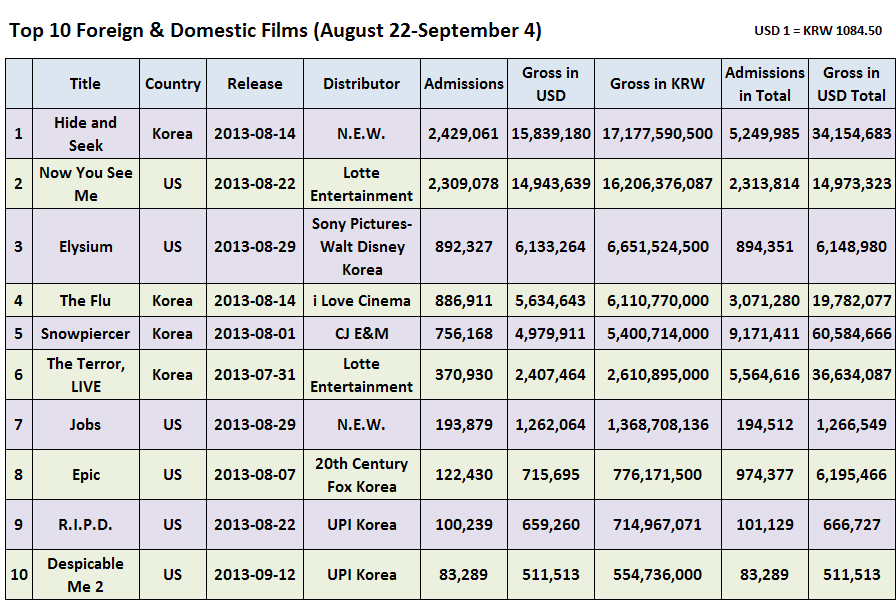