May 13, 2013
14th Jeonju International Film Festival Final Report
On April 25th, the 14th Jeonju International Film Festival that commenced at the Sori Arts Center closed on 3rd May with visitors’ attention and involvement. Cinema Street was crowded with various guests and filmmakers visiting from all around the world. Tickets of all sections including Focus On and Stranger Than Cinema were evenly sold out. Besides, the 5th Jeonju Project Market brought huge success within steady management. 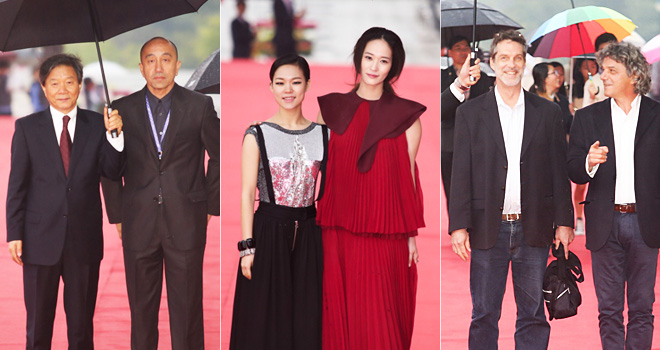 ▶ JIFF’s Talk show programs are getting hotter
The 14th Jeonju International Film Festival received positive responses again from guests and audiences crowded on Cinema Street from all around the world. Visitors at the festival loved the special events that followed the movie screenings. Renewed and diversified talk show programs in the JIFF Lounge and venues were especially popular this year. In the JIFF Lounge, meeting with directors and stars of Short! Short! Short! 2013 (LEE Sang-woo's Exit, LEE Jin-woo's Waltzing on Thunder, PARK Jin-sung and Jin-seok's The Body), KANG Woo-suk's Fist of Legend, KANG Jin-a's Dear Dolphin made the festival much more joyful. In addition, there were also great lectures from film critics and humanities scholars after the film screenings.
About 65,300 guests were expected to visit this year even though numbers of screenings seats were decreased by 1,300. Unpleasant weather conditions was one of the reasons behind the reduction. However, passionate live performances throughout the rainy days proved their energy and audiences who filled theaters showed their unchanging love for movies once again.

▶ Popularity of JIFF Talk with various topics
JIFF 2013 changed the numbers of program events this year and a total 23 events were processed. It showed that communication with guests and audiences was getting much stronger and more intimate. A renewed program, the Master Class was carried out as an interesting discussion with Director RYOO Seung-wan and Darezhan OMIRBAYEV. Talk Class helps to comprehend films with critics, philosophers, humanities scholars as well as film directors and guests. Especially, Cinema Meets Kafka The Castle, Director Michael HANEKE with philosopher KANG Shin-joo received high praises as a very unique program that only JIFF could provide. The lecture continued along about two and a half hoursf.
Cinema Talk was the meeting place for audiences with directors of Short! Short! Short! 2013 and its original author, KIM Young-ha. The JIFF Lounge Talk invited the guests of Fist of Legend: Director KANG Woo-suk with actors HWANG Jung-min, YU Jun-sang, JUNG Woong-in and SUNG Ji-ru. Moreover, Concert Talk showed the performances of musicians of 51+. Audiences witnessed how popular these programs were during the festival.

▶ All sections including Focus On and experimental films reported sell outs
Just like last year, including Opening Film Foxfire, the Jeonju International Film Festival’s representative film production projects Jeonju Digital Project 2013: Strangers (including Kobayashi MASAHIRO's Strangers when We Meet, Zhang LU's Over There, EDWIN's Someone's Wife in the Boat of Someone's Husband) and Short! Short! Short! 2013 drew great attention. Especially, tickets for Short! Short! Short! 2013 on weekends were sold out online within 31 seconds.Director Paul Thomas Anderson of The Master and Director Diederik Ebbinge of Matterhorn caught the eyes of audiences. The documentary film Project Cheonan Ship directed by BAEK Seung-woo and produced by CHUNG Ji-young, Dear Dolphin and CHEER UP, Mr. LEE in the Korean Competition also amazed viewers. In addition, Screenings of Stranger Than Cinema were occupied over 80% by audiences that proved the stability of organizing programs.

▶ Talk events and performances caught fire
The Cinema Street of Jeonju was full of promising entertainment packed with live music, films and performance arts. 44 events were held, up from 33 last year; the festival was also filled with visitors who were interested in outdoor performances even during rainy days.

▶ Promise of bringing a better 15th Jeonju International Film Festival in 2014
For nine busy days, the 14th Jeonju International Film Festival sought to screen diverse films and provide entertainment at the same time. JIFF 2013 showed the possibility of the next leap with special guests’ participation from Korea to all around the world with Laurent Cantet, Katie Coseni, JUNG Woo-sung, and RYOO Seung-wan.
Although the festival was less than perfect organized with new staff members, this was be regarded as an opportunity to build up a new turning point by serving as a foundation of growth. The Jeonju International Film Festival is willing to make the best effort with careful managements as required especially for shuttle buses, screening systems and services for guests and audiences. Additionally, JIFF would keep seeking to authenticity as a festival by developing more plot-devising programs like the success of Short! Short! Short! 2013.
Any copying, republication or redistribution of KOFIC's content is prohibited without prior consent of KOFIC.
Related People Related Films Related Company