May 02, 2013
11 New Korean Feature Films Screened at FEFF
Europe’s biggest showcase of popular Asian cinema takes place every year in the small northeastern Italian town of Udine. Renowned for its intimate atmosphere and enthusiastic audience, the Udine Far East Film Festival held its 15th edition from April 18-27. More than 60 films were presented, and each work received a single screening at the majestic 1200-seat Teatro Nuovo Giovanni da Udine. Despite the severe economic crisis that currently grips Italy, the festival hosted large numbers of guests and attracted a paying audience of over 50,000.

Korean cinema always makes up a significant portion of the FEFF’s program, with 10-12 new features screened in a typical year. However this year in particular, Korean films were highly visible. This began on the opening night, when the festival presented a special Golden Mulberry lifetime achievement award to KIM Dong-ho, who during his tenure at the helm of the Busan International Film Festival (1996-2010) was a frequent guest in Udine. Saluting his efforts to promote Korean and Asian cinema to international audiences, the FEFF presented Mr. KIM with a trophy and screened his recent directorial debut, the 24-minute film Jury, during the opening ceremony.
This was followed by the festival’s official opening film, director RYOO Seung-wan’s The Berlin File. On hand to present the film for its international premiere was director RYOO and producer KANG Hae-jung. The big-budget work was warmly received by the capacity crowd, which broke into spontaneous applause several times during the screening. The work’s impressive action set pieces drew particular notice, with many guests comparing them favorably to contemporary Hollywood films.
In total, 11 new Korean feature films were screened at the FEFF, which has broadened its focus in recent years to include not only mainstream commercial hits but also low-budget works that exhibit a flair for storytelling. Apart from The Berlin File, films presented included PARK Hoon-jung’s gangster epic New World (2013), JO Sung-hee’s fantasy romance A Werewolf Boy (2012), CHOI Dong-hoon’s record-breaking The Thieves (2012), MIN Kyu-dong’s comic romance All About My Wife (2012), JUNG Ji-woo’s novel adaptation Eungyo (2012), LEE Won-suk’s romantic comedy How to Use Guys with Secret Tips (2013), SHIN Jung-won’s occult comedy Ghost Sweepers (2012), KANG Yi-kwan’s award-winning social drama Juvenile Offender (2012), David CHO’s low-budget drama The Winter of the Year Was Warm (2012), and CHUNG Ji-young’s hard-hitting human rights drama National Security (2012).

Guests in attendance included the above-mentioned KIM Dong-ho and RYOO Seung-wan, as well as directors KANG Yi-kwan, PARK Hoon-jung and LEE Won-suk; BIFF programmer and Jury producer HONG Hyo-sook; and National Security producer/distributor JUNG Sang-jin. In special panels, the guests answered questions about their films and discussed various issues related to the contemporary Korean film industry. Meanwhile, well-known actor RYOO Seung-bum (The Berlin File), also traveled from Paris to Udine in the end of the festival to serve as DJ for the closing night party.
Apart from the South Korean films described above, there was also a screening of the North Korean-Belgian-UK coproduction Comrade Kim Goes Flying, by directors KIM Gwang-hun, Nicholas BONNER, and Anja DAELEMANS. Based on an idea by BONNER and DAELEMANS, and scripted and shot in North Korea, the film is an uplifting tale of a woman who works in a coal mine and dreams of joining the Pyongyang Circus. The film has previously been presented in many festivals around the world, including Toronto, Busan, Rotterdam, and numerous festivals in the US. However this was the first time that the film was screened in the presence of guests from North Korea. Producer RYOM Mi-hwa and leading actress HAN Jong-shim made the trip to Udine and presented the film together with Nicholas BONNER to a curious and enthusiastic audience. In a special panel, the guests described the film’s reception in North Korea, where it has been on general release since late 2012. HAN Jong-shim said she has received numerous fan letters from around the country, and the number of young applicants to become trapeze artists at the Pyongyang Circus has risen in the wake of the film’s popularity. 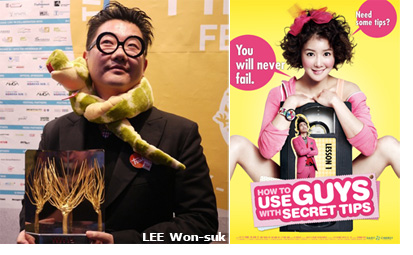 Finally, Korean cinema was once again thrown into the spotlight during the closing ceremony, when the festival awards were presented. The FEFF has no juries; instead, all of the contemporary films in the program are voted on by audience members. Among 57 eligible films, the three highest-rated works received trophies: Ip Man: The Final Fight by Hong Kong director Herman YAU received the third-place award; horror film Countdown by Thai director Baz Poonpiriya received the second-place award; and South Korean romantic comedy How to Use Guys with Secret Tips by director LEE Won-suk received the top prize with an impressive score of 4.42/5.
Director LEE was present to receive his award, and expressed his gratitude to the Udine audience for receiving his film with such warmth and affection. Given the fact that the movie was comparatively overlooked at the Korean box office, the award came as vindication for debut director LEE, and a recognition of his significant talent.
Any copying, republication or redistribution of KOFIC's content is prohibited without prior consent of KOFIC.
Related People Related Films Related Company