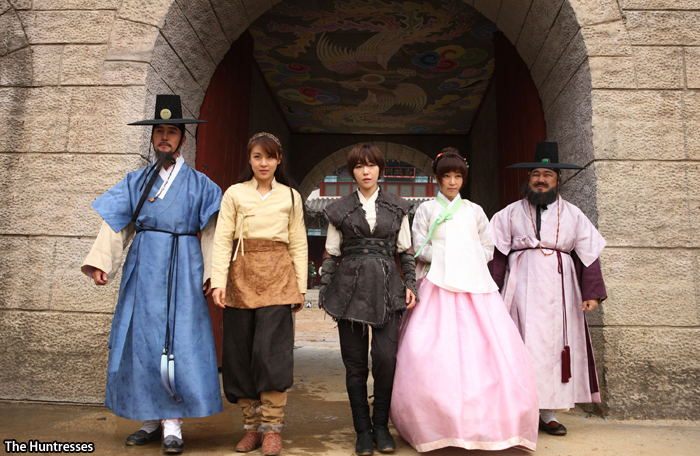 As one of the two main holidays of the year along with the Korean Thanksgiving ‘Chuseok,’ the Korean Lunar New Year holiday is one the most lucrative times for theaters. Last year’s box office hits raked in a whopping 12.8 million admissions for Miracle in Cell No. 7, and seven million for The Berlin File, driving the local film industry into a wave of excitement. Looking at this year, a line-up of Korean films aiming for families who will spend the four-day holiday together are ready to rock theaters. Consisting of diverse genres and themes as well as a distinct local flavor, it will be quite interesting to see which film will have the last laugh. We drew up a list of four New Year’s titles from the major Korean distributors: CJ, Lotte, Showbox and NEW.
Big 1, Hot Young Bloods (literal translation)
Release Date January 23rd, 2014 | Genre Comedy, Drama | Director LEE Yeon-woo | Starring PARK Bo-young, LEE Jong-suk, KIM Young-kwang 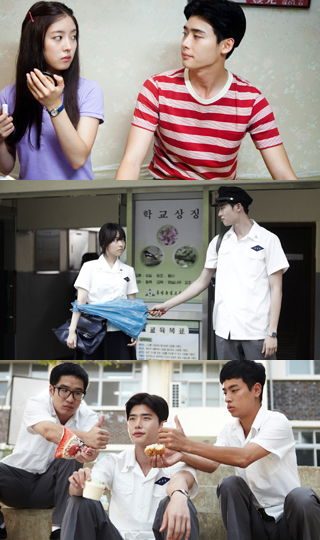 Hot Young Bloods is a teen romantic comedy with a special premise. Filmmaker LEE Yeon-woo’s directorial touch displayed in his 2009 film Running Turtle shines once again in this new film. Running Turtle, which told the story of a country detective who sleuthes around to capture a notorious escaped convict, received public acclaim by incorporating the slow ‘Choongchung’ dialect-ridden dialogue and a realistic, survival-oriented character into the crime comedy genre. This time, the director brings along the comic elements of his previous film to create this high school comedy once again based in the ‘Choongchung’ province.
The year is 1982. Young-sook, played by PARK Bo-young, a notorious female high school gang member in the Choongchung province, falls head over heels in love with local heartthrob and Casanova Joong-gil, played by LEE Jong-suk. Young-sook’s devotion to Joong-gil never wavers despite the persistent courtship of the neighborhood’s top fighter Gwang-shik’s (played by KIM Young-kwang), that is until she meets her match: the innocent-looking transfer student from Seoul, played by LEE Se-young, who captures Joong-gil’s heart.
Hot Young Bloods boasts a star cast featuring PARK Bo-young of Scandal Makers (2008) and A Werewolf Boy (2012), which each attracted 8.2 million and 6.65 million admissions respectively, and LEE Jong-suk from As One (2012), The Face Reader (2013) and No Breathing (2013). With a cast targeted for teens to twenties along with its retro style and local flavor, the film hopes to appeal to various age groups. Distributed by Lotte Entertainment, Hot Young Bloods was pre-sold to Hong Kong ahead of its Korean theatrical release.
Big 2, The Huntresses
Release Date January 23rd, 2014 (tentative) | Genre Action, Drama | Director PARK Jae-hyun | Starring HA Ji-won, KANG Ye-won, SON Ga-in 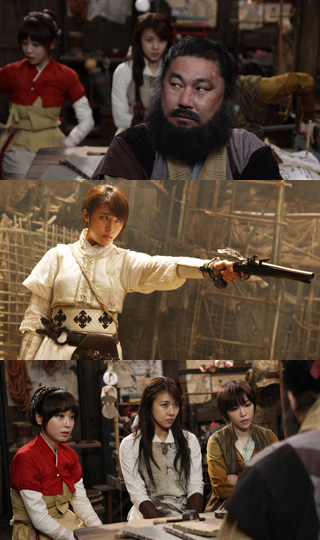 The Huntresses is another period action film from Showbox. HA Ji-won, who has performed serious characters in period action projects such as TV dramas Damo and Empress Ki, and the film Duelist (2005) returns with the feature film The Huntresses. Here she is showcasing textbook sword and gun-wielding action moves as she plays the role of the Chosun Dynasty’s No. 1 bounty hunter Jin-ok.
The Huntresses unravels as the beautiful and talented swordswoman Jin-ok, a tough housewife and swordswoman Hong-dan played by KANG Ye-won, and the younger feisty hothead Ga-bi played by SON Ga-in, go together in search for the vanished stauroscope on a commissioned mission from the king. The other two actresses who complete the Korean-style ‘Charlie’s Angels’ trio with HA Ji-won are KANG Ye-won, who gave comical performances in blockbusters Haeundae (2009) and Quick (2011), and idol group vocalist SON Ga-in. This is the first screen appearance for SON Ga-in in the years since Closer To Heaven (2009), which starred HA Ji-won and KIM Myung-min.
Originally scheduled to be released in theaters in May 2013, The Huntresses moved its release date to January 2014 after deciding on supplementary post-production work. The film is directed by veteran filmmaker PARK Jae-hyun, of The Legend of Gingko (2000), Oh! Lala Sisters (2002) and How to Keep My Love (2004). Distributed by Showbox.
Big 3, Miss Granny
Release Date January 23rd, 2014 | Genre Comedy, Drama | Director HWANG Dong-hyuk | Starring SHIM Eun-kyoung, NA Moon-hee, PARK In-hwan 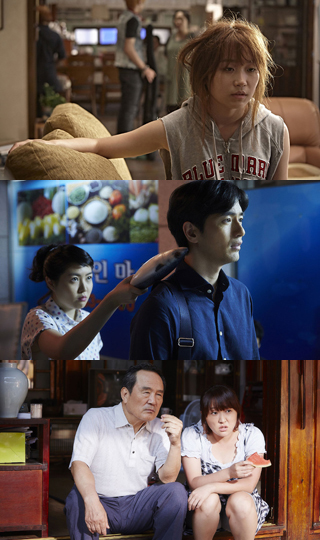 NA Moon-hee occupies a special place in Korean Cinema. This actress, who has established a classic Korean mother persona through numerous TV dramas she has performed in, finally gained silver screen visibility through the 2005 film You Are My Sunshine and Crying Fist (2006). Later on she received public acclaim once again as the lead characters’ mother in noir Cruel Winter Blues (2006) and May 18 (2007), the action film based on the May 18th Gwangju Democratization Movement. She began starring in lead roles with her 2007 film Kidnapping Granny K and then titles such as Twilight Gangsters (2010), Harmony (2010) and Girl Scouts (2008).
From tearjerker dramas to sidesplitting comedies, NA Moon-hee has done it all and she now returns to the screen as a twenty-year old woman whose body is swapped with that of a foul-mouthed old lady in Miss Granny. Co-starring with SHIM Eun-kyoung of Sunny (2011) and Masquerade (2012), NA Moon-hee plays the lonely old lady OH Mal-soon whose family abandons her and then runs into a series of problems when her body is transformed.
Miss Granny’s strategy is to cast two endearing actresses, NA Moon-hee and SHIM Eun-kyoung, in comic roles and to create an interesting chemistry between them and other supporting roles from the likes of SUNG Dong-il, LEE Jin-wook and PARK In-hwan. Aimed to be a family crowd-pleaser, this film is like a New Year’s gift basket with everything in it. Directed by HWANG Dong-hyuk, the filmmaker of Silenced (2011), which was based on a real case of sexual abuse committed at a special school for the hearing-impaired, it will be interesting to see how this lively comedy will differ from the director’s previous film. Distributed by CJ E&M.
Big 4, When A Man Loves A Woman (literal translation)
Release Date January 22nd, 2014 | Genre Drama | Director HAN Dong-wook | Starring HWANG Jung-min, HAN Hye-jin, KWAK Do-won 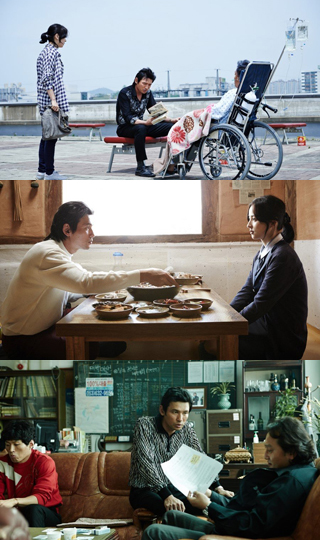 Filmmaker HAN Dong-wook, who worked on films such as The Unjust (2010), Nameless Gangster (2011) and New World (2012) as an assistant director, makes an ambitious feature debut with When A Man Loves A Woman. The film deals with the story of a good-for-nothing man who finally opens his eyes to what might be the first and last love of his life. Forty-two year-old HAN Tae-il (played by HWANG Jung-min), who lives in the town of Gunsan in the Jeolla province, leads a wastrel’s life that consists of a job at a money broker agency and frequent visits to prison. When he is struck with love at first sight after meeting the spunky Ho-jeong (played by HAN Hye-jin), who is taking care of his sick father, he awkwardly takes his first step to start a relationship with her.
The cast of When A Man Loves A Woman is quite impressive. HWANG Jung-min, who gave superb performances in the melodramas You Are My Sunshine (2005) with JEON Do-yeon and Happiness (2007) directed by HUR Jin-ho, is expected to bring a different flavor to his character in this film. While HAN Hye-jin, who returns to the screen for the first time since her marriage to soccer player KI Sung-yueng, plays the lead opposite to HWANG. In addition, KWAK Do-won, who’s been praised for his performance as the merciless police inspector CHA Dong-young in The Attorney (2013), is featured as Tae-il’s older brother.
Among the comedy rush in theaters during the New Year’s holiday, When A Man Loves A Woman is hoping to stand out as a moving tearjerker. It is distributed by NEW, which is in the midst of a strong streak as their hit title The Attorney commands the box office chart.
By SONG Soon-jin
Any copying, republication or redistribution of KOFIC's content is prohibited without prior consent of KOFIC.
Related People Related Films Related Company