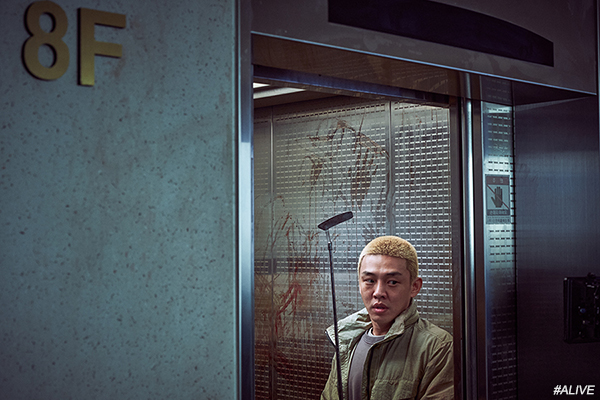 The box office showed its most convincing signs of life yet during the Covid-19 pandemic as a hot new title lured large crowds to multiplexes. Total sales for the weekend reached a shade under one million, which was double the previous weekend’s total and over ten times higher than the record lows experienced back in April. 83% of the past weekend’s admissions went to local fare.
Exploding into theaters on Wednesday, the zombie drama #ALIVE with YOO Ah-in and PARK Shin-hye proved that audiences were willing to visit theaters en masse under the right set of circumstances. The film posted 204,000 sales (USD 5.22 million) on its opening day, the best start seen in the market since WOO Min-ho’s hit The Man Standing Next, which opened 155 days ago in the lead-up to this year’s Lunar New Year holidays. Over the weekend, the film attracted 703,000 viewers (USD million), giving it a total of 1.06 million admissions (USD 7.36 million) over its first five days.
The film, from hit production company Zip Cinema, benefited from a viral marketing campaign that skewed young and emphasized social media. The campaign was also able to turn a weakness into a strength, as the story’s similarities with present-day anxieties (a young man and woman isolated in their apartments during a zombie pandemic) became a unique selling point. However, following its strong debut, the film may have its work cut out for it with middling reactions from both the press and public.
With a slight 37% drop, Innocence eased to second place during its third week in theaters, which saw another 98,000 seats (USD 699,000) filled. The film has to date attracted a respectable 716,000 spectators (USD 5.29 million).
Slipping a spot to third in week two was Pixar’s latest animation Onward. With 88,000 entries (USD 615,000), the film has now welcomed 280,000 viewers (USD 2.03 million).
Getting a rerelease in the lead-up to the launch of Tenet, which was delayed again over the weekend until mid-August, was Christopher NOLAN’s Batman Begins. The comic book origin story brought in 21,000 spectators (USD 126,000), which raised it lifetime sales to 921,000.
Remaining a draw during its successful rerelease was the Hollywood musical The Greatest Showman, which slowed only 7%. The film filled another 15,000 seats (USD 75,000), lifting its lifetime total to 1.68 million viewers.
This week’s major release will be the pansori drama The Singer, the latest film from CHO Jung-rae, director of the period comfort women drama Spirits’ Homecoming (2016), the most successful narrative indie film of all time in Korea. However, it’s too early to tell what kind of an impact it will have as it will need to content with the sophomore weekend of #ALIVE, and a rerelease of Christopher NOLAN’s beloved The Dark Knight.
Any copying, republication or redistribution of KOFIC's content is prohibited without prior consent of KOFIC.
Related People Related Films Related Company Related News