SVAHA : THE SIXTH FINGER Points Its Way to First 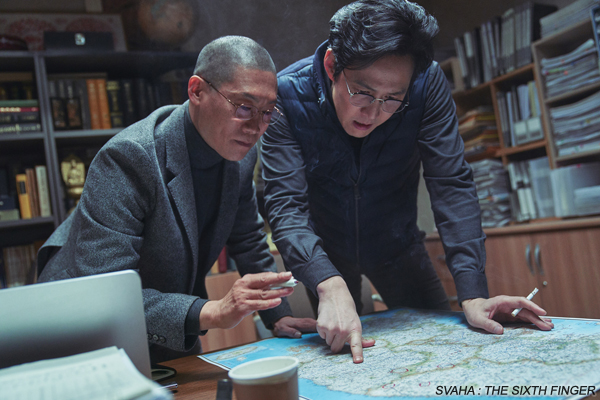 Local titles continued to impress in the first quarter of 2019 as sales were down only slightly to 2.26 million while the market share for Korean films swelled to 79%. A Hollywood tentpole is sure to reverse that next month, but until then local holdovers look set to mop up the spoils.
Debuting in first place was CJ Entertainment’s SVAHA : THE SIXTH FINGER, the second film from The Priests (2015) director JANG Jae-hyun. The cult-themed thriller with LEE Jung-jae and PARK Jung-min opened with a strong 840,000 sales (USD 6.53 million) and has already collected 1.18 million viewers (USD 8.92 million) in five days. Critical reaction has been strong but the film will have its work cut out for it against well-received local titles in the coming weeks.
Finally loosening its hold on the first rank was the sensational local crime comedy hit Extreme Job, which dropped 49% as it added another 478,000 spectators (USD 3.68 million) to its haul, which now stands at a phenomenal 15.42 million admissions (USD 118.41 million). The film is only the second in history to surpass 15 million viewers at the Korean box office.
After its solid debut last week, local legal drama Innocent Witness exhibited a fantastic hold as it dropped only 14% and welcomed 454,000 entries (USD 3.41 million). That puts the film at 1.56 million admissions (USD 11.38 million) to date, with much more to come as word of mouth continues to build.
Debuting in fourth place with 99,000 sales (USD 678,000) was the US animation Cinderella and the Secret Prince. The film has sold 133,000 tickets (USD 893,000) since its Wednesday start.
In fifth place was Alita: Battle Angel, which slowed 68% in its third week as it filled another 79,000 seats (USD 641,000), bringing its total in Korea to 1.89 million admissions (USD 16.09 million).
Korean films will dominate once more this coming weekend with three strong local holdovers and the debut of the new period sports drama Bicycle King Uhm Bok-Dong (translated title).
Any copying, republication or redistribution of KOFIC's content is prohibited without prior consent of KOFIC.
Related People Related Films Related Company