1987 Tops COCO Opening as It Ascends to Top Rank

Jan 16, 2018
ALONG WITH THE GODS Becomes 6th Most Successful Korean Film of All Time 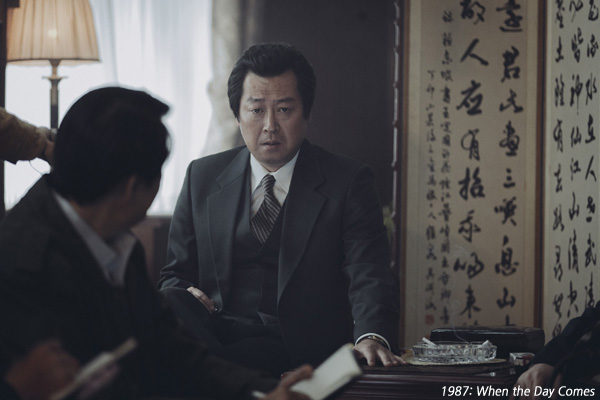 Korea’s end-of-year hits switched places during another busy early January frame which welcomed 3.14 million viewers. Hollywood imports once again failed to topple last year’s local blockbusters as the Korean market share hit 57.6%.
After spending two weeks in second place behind what has become one of the biggest Korean films of all time, political drama 1987: When the Day Comes has ascended to first place after staying level with a minimal 3% drop. With another 1.03 million entries (USD 8.25 million) banked and 5.79 million admissions (USD 44.04 million) overall, the slow burning CJ Entertainment hit has enthralled critics and viewers and is on track to surpass several more milestones over the coming weeks.
Finally relinquishing pole position after three straight weekend wins, Along with the Gods: The Two Worlds slowed 44%, bringing in an additional 746,000 viewers (USD 5.9 million). That gives the fantasy epic 12.84 million admissions (USD 97.51 million) which pushed it past Miracle in Cell No.7 (2013) to become the sixth most successful Korean film of all time.
Opening in third place was Disney-Pixar’s latest film Coco with 732,000 spectators (USD 5.75 million) over the weekend and 850,000 entries (USD 6.62 million) over its first four days. Reservations remain strong and with good word of mouth, the animated film could build significantly on its debut.
Down one spot and 50% in week two was Hollywood sequel Jumanji: Welcome to the Jungle, recording another 328,000 viewers (USD 2.59 million). Despite being a major success around the world, the family adventure hasn’t quite caught in Korea, though it has performed reasonably well with 1.52 million entries (USD 11.66 million) in 12 days.
Matt Damon vehicle Downsizing closed out the top five in its debut by filling 92,000 seats (USD 749,000) over three days and reaching 125,000 sales (USD 989,000) since Thursday.
CJ will be competing with itself this week as the human drama Keys to the Heart with LEE Byung-hun and PARK Jung-min will attempt to bring 1987: When the Day Comes back down to earth in its fourth week. Also on deck will be the Hollywood sequel Maze Runner: The Death Cure.
Any copying, republication or redistribution of KOFIC's content is prohibited without prior consent of KOFIC.
Related People Related Films Related Company Related News