With a lack of enticing new releases, the top of the Korean box office hasn’t changed for almost a month as the same two films have held first and second place over the last three weekends. Following strong runs, the Tom Cruise-starring sci-fi Edge of Tomorrow and homegrown thriller A Hard Day look set to finally drop in the chart as the most highly anticipated Hollywood release of the summer marches into theaters this week.
Taking first place on the mid-June chart with 1.84 million admissions was Edge of Tomorrow, the popular time travel action sci-fi that has proven a big hit at the global box office for ageing action star Tom Cruise. The film has held first place at the box office ever since its opening on June 4th and has attracted a robust 4.1 million spectators to date. Tom Cruise’s box office clout has been flagging in America in recent years but his pull in international territories has remained strong. A big name in Korea who was given an honorary citizenship to Busan in 2012, Cruise’s most significant hit in Korea was Mission Impossible: Ghost Protocol, which scored 7.51 million admissions at the end of 2011. His most recent film Oblivion, another sci-fi, albeit on a more modest scale, accrued 1.52 million viewers last year. 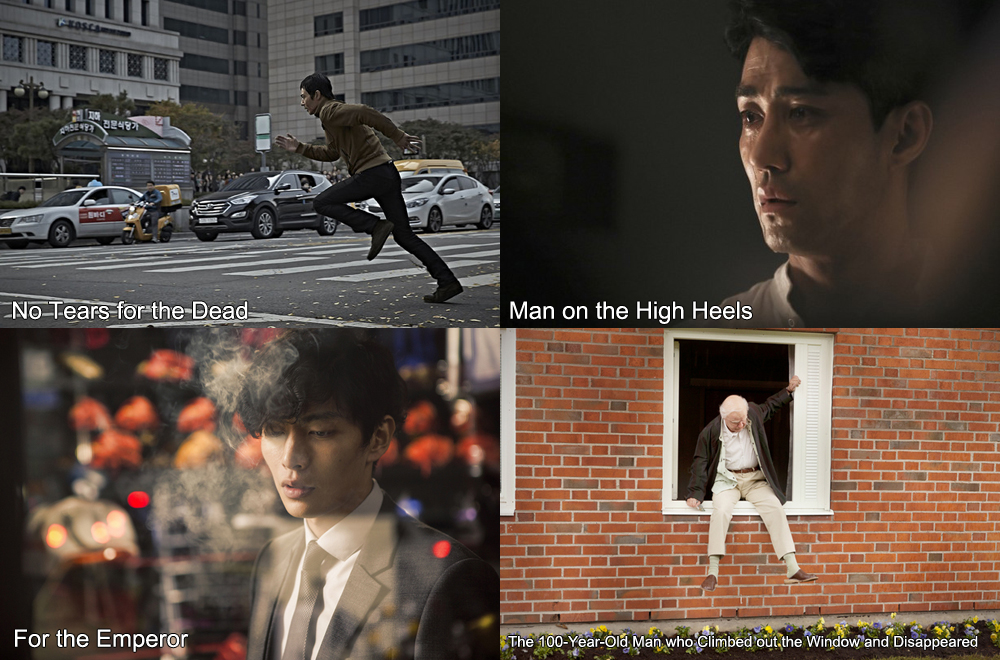 Though it has been unable to overcome Hollywood blockbusters on the weekend chart, local thriller A Hard Day is on a sensational run, having laid claim to second place for the last four weeks and showing no signs of slowing down. Over the last fortnight the mid-level film added 1.15 million tickets to its 2.85 million admissions total. Starring LEE Sun-kyun and CHO Jin-woong, the film debuted to stellar reviews at the Cannes Film Festival in the Director’s Fortnight sidebar. The blackly humorous noir thriller has remained a presence through strong word of mouth and laid other noir films with bigger stars to waste during the month, such as the underperforming No Tears for the Dead (starring JANG Dong-geun and KIM Min-hee) and Man on the High Heels (with CHA Seung-won), which wound up tenth and eleventh on the chart, with less than 70,000 admissions a piece and 600,988 and 338,663 admission totals, respectively.
Another local noir film that has fared a little better is For the Emperor, starring LEE Min-ki and PARK Sung-woong. Opening two weeks ago, the film has brought in 561,752 admissions to date and took third place on the chart. However, unlike A Hard Day, the film seems to have been unable to generate strong buzz and should not remain on the chart for much longer.
Following only one day on the chart, Transformers: Age of Extinction, the fourth installment in Michael Bay’s blockbuster franchise, was able to enter the two-week rankings at number four with 471,350 admissions, signaling the start of what should be an enormous run. The previous installment holds the opening weekend record in Korea with its 2.3 million admissions three-day debut and all signs point to a similar performance from the latest robot extravaganza.
Occupying fifth place with 286,906 sales was holdover X-Men: Days of Future Past as it wraps up it run. The Hollywood sci-fi has generated a healthy 4.31 million admissions to date. Just behind was another big-budget Tinseltown offering as Disney’s fairy tale update Maleficient, starring Angelina Jolie, added 248,475 spectators to its 1.39 million total.
Top of the diversity chart was the Swedish adaptation of the novel The 100-Year-Old Man who Climbed out the Window and Disappeared. After a week in theaters the film has already accumulated 148,228 viewers, enough to secure eighth on the overall chart. Meanwhile, Spike Jonze’s Her continued to perform well, adding another 53,873 viewers to bring its total to an impressive 282,568 admissions. 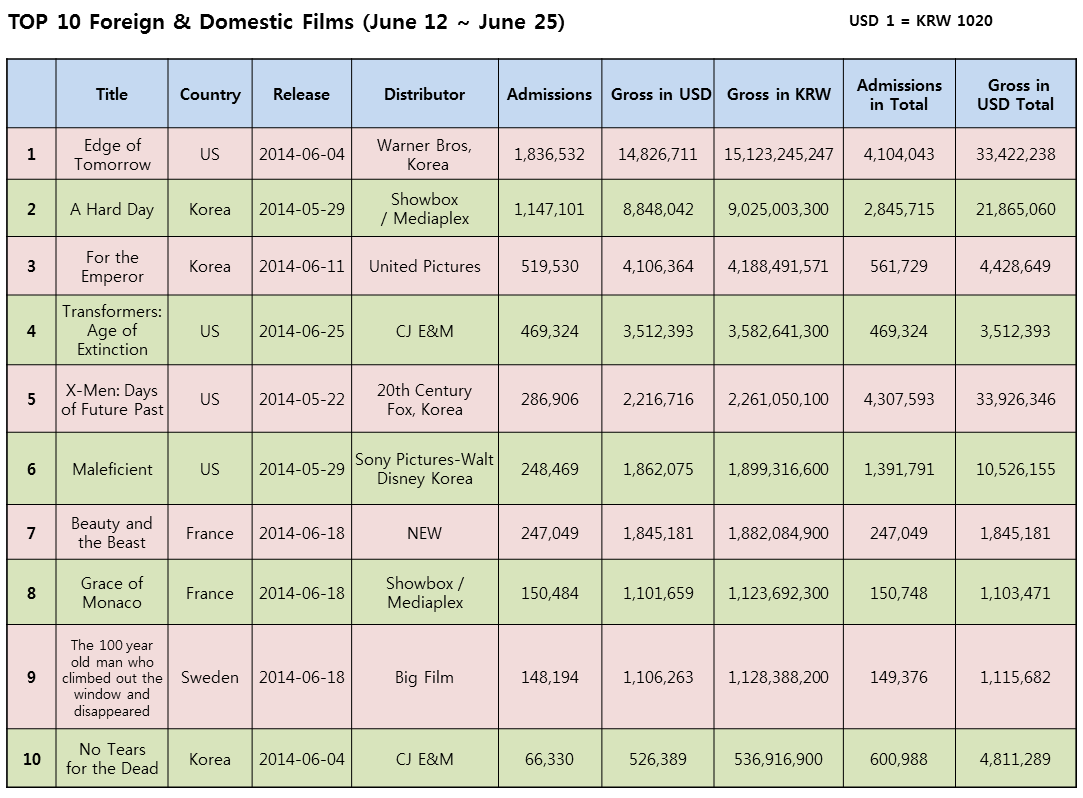 By Pierce Conran
Any copying, republication or redistribution of KOFIC's content is prohibited without prior consent of KOFIC.
Related People Related Films