Frozen and Miss Granny are still dominating Korean cinemas in February. The Korean Film Council (KOFIC – Chairman, KIM Eui-suk) announced on the 16th that Disney’s animation Frozen and the family comedy Miss Granny by HWANG Dong-hyuk (Silenced [2011]), are still the top two draws at the box office, beating newly released competitors.
The performance of Frozen has been astonishing. Even a month after its first showing in Korea, the animation maintained its top place last weekend with 747,415 viewers. During those three days, it enjoyed a 29.9% market share. As of the 20th, more than nine million people have watched Frozen, making it the second most popular foreign film ever in the country, outstripping Iron Man 3, which was on screens last year (The first is Avatar [2009], directed by James Cameron, which recorded 13.3 million viewers.) Considering that favorable word of mouth is still spreading about Frozen, it is expected to exceed ten million admissions next week.
Although its popularity has been overshadowed because of Frozen, Miss Granny’s success is also notable. Released on the 16th of last month, the Korean film added 680,000 viewers last weekend and is seated at number two on the box office chart. The market share during the three-day weekend was 24.5%, trailing Frozen by only 5%. It started off at number three on its first day of screening, after Frozen and Hot Young Bloods (starring LEE Jong-suk), but good word-of-mouth helped it to gain traction. Topping seven million viewers as of the 17th of this month, Miss Granny is expected to garner up to about nine million.

The beginning of new release Venus Talk hasn’t been very promising. Directed by KWON Chil-in of Singles (2003) and Love On-Air (2012), with a group of female celebrities - CHO Min-soo (Pieta [2012]), UHM Jeong-hwa (Marriage Is a Crazy Thing [2002], Montage) and MOON So-ri (Oasis [2002], A Good Lawyer’s Wife [2003]) – Venus Talk drew 270,000 moviegoers during its first three days. As of the 20th, a total of 490,140 people watched this new film which talks about the sex and love of women in their 40s in a very plain and frank manner. It will probably continue to draw more viewers at a steady pace as people who have seen it spread favorable comments.
Apostle and Another Family, two films carrying very strong social messages, are continuing to draw more viewers. Based on a real story of an ordinary father who stands against a huge conglomerate, Another Family sold 99,262 more tickets over the last weekend. Starring KIM In-kwon of Haeundae (2009) and Born to Sing, Apostle, which talks about a North Korean defector, drew 94,850 viewers during the weekend. On the other hand, The Attorney was pushed off the top ten list with just 12,676 admissions during the same period. The court drama is likely to wrap up as the fifth most popular Korean film ever with a total of 11.36 million ticket sales, placing just below Masquerade (2012) (12.32 million accumulated viewers).
Among foreign films, RoboCop, returning after 27 years, recorded 600,000 accumulated admissions. Due to distribution fee disputes, The Lego Movie couldn’t play on the screens of CGV and Lotte Cinemas in Seoul, resulting in attracting only 34,951 spectators. In the diversity films chart, the Coen brothers’ Inside Llewyn Davis is far ahead with a 46.1% market share, and a total of 90,244 ticket sales as of the 20th. 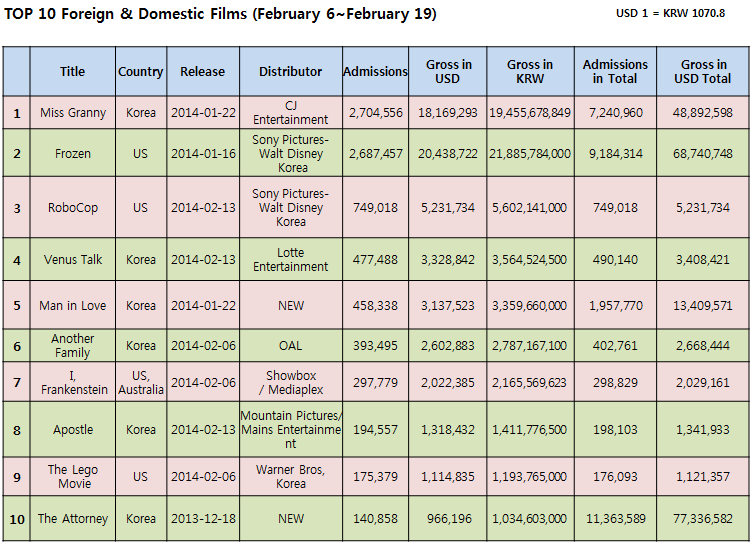