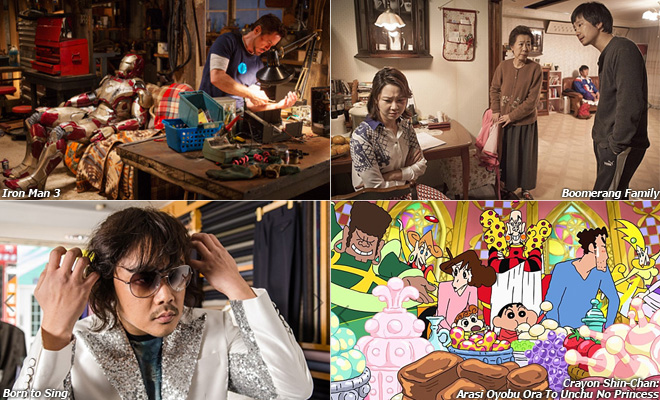 Hollywood blockbuster Iron Man 3 continued to dominate screens in its second and third week on release, as it has in other territories around the world. With another 3.9 million tickets added over the past two weeks, its running total now stands at a massive 7.7 million admissions, which is worth approximately $55 million. This qualifies it as the second highest grossing Hollywood film in Korea ever, behind only James CAMERON’s Avatar which stands head and shoulders above its compatriots with 13.4 million admissions. In the upcoming weeks Iron Man 3 is expected to continue doing well, with only The Great Gatsby (released on May 16) expected to provide major competition until the release of Star Trek Into Darkness and After Earth on May 30th.
Two new Korean features, Born to Sing and Boomerang Family, placed at #2 and #3 in the chart respectively. Born to Sing stars KIM In-kwon as a man who harbors a secret dream to become a singer, and who without telling his wife, begins preparing to enter a nationwide televised singing contest. Released on May 1st, the film took 753,204 admissions in two weeks. The film is directed by LEE Jong-pil, who previously made the classical music documentary Ensemble and numerous short films including Light My Fire (2007).
Performing even better was Boomerang Family, which opened eight days later on May 9th and accumulated 704,261 admissions to place at #3. Released by CJ E&M, the novel adaptation is a story of a failed film director who moves back in with his single mother and older brother, at the same time as his sister and niece turn up in need of accommodation. The film’s biggest selling point is its stellar cast including PARK Hae-il (Eungyo), YOON Je-moon (Fist of Legend), YOUN Yuh-jung (The Taste of Money), KONG Hyo-jin (Family Ties), and child star JIN Ji-hee. It is directed by SONG Hae-sung, who is well-known for the acclaimed Failan (2001) as well as biopic Rikidozan: A Hero Extraordinary (2004), box office hit Maundy Thursday (2006), and action remake A Better Tomorrow (2010).
With the top three films combining to take 87.6% of the overall gross, there wasn’t much room for other releases to leave much of an impression. Crayon Shin-Chan: Arasi Oyobu Ora To Unchu No Princess, the latest children’s feature based on the well-known Japanese animated character, stands at #4 with 122,815 admissions. Just behind it was Fist of Legend, directed by well-known producer-director KANG Woo-suk (Moss), with an additional 120,516 tickets sold. Since April 10th the film has grossed a total of 1.74 million admissions. Fist of Legend stars HWANG Jung-min as a single father who is persuaded to take part in a popular reality TV show in which ordinary middle-aged men fight in a boxing ring.
Selected advanced screenings of DreamWorks animated feature The Croods resulted in 72,639 admissions, which was enough to place at #6. The film receives its official release on May 16th. The re-release of Finding Nemo in a remastered 3-D format attracted a modest 64,496 admissions.
Meanwhile To Rome with Love, the latest film by Woody ALLEN, added another 41,056 tickets to bring its overall total to a very respectable 170,682 admissions. This appears to be the director’s second-highest grossing film to date in Korea, behind Midnight in Paris which took 355,608 admissions. To Rome with Love currently stands at the top of KOFIC’s special releases or “diversity” chart, followed by the acclaimed French film Rust and Bone which has taken 22,693 admissions during its two weeks on release.