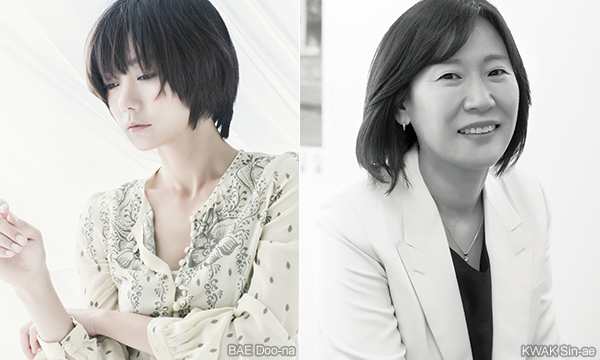 International star BAE Doo-na and Barunson E&A CEO KWAK Sin-ae were awarded the ‘Etoile du Cinéma’ (Cinema Star) prizes during the Busan International Film Festival this year. BAE was conferred her award ahead of the premiere of her latest film #iamhere at the festival, while KWAK was given her award during the French Night event that took place during BIFF. The prize was created last year by the French Embassy in Korea and recognizes contributions by Korean film professionals to French-Korean film collaborations.
BAE received her award after appearing in the new French film #iamhere, from La Famille Bélier director Eric LARTIGAU, in which she stars alongside French star Alain CHABAT. The film had its world premiere in Busan and is represented internationally by the French company Gaumont, while Next Entertainment World will handle the film’s Korean distribution.
The star is known for classic films such BONG Joon-ho’s Barking Dogs Never Bite (2000) and The Host (2006), PARK Chan-wook’s Sympathy for Mr. Vengeance (2002) and JEONG Jae-eun’s Take Care of My Cat (2001) as well as international productions by the WACHOWSKIS such as Cloud Atlas and the Netflix series Sense8.
KWAK was recognized for being the head of the company that brought the world BONG Joon-ho’s PARASITE, which became the first Korean film to pick up the Palme d’Or at the Cannes Film Festival. It subsequently became the most popular Korean release in France, with over 1.6 million admissions, not to mention the most successful Palme d’Or in the country since Micheal MOORE’s documentary Fahrenheit 9/11 in 2004.
Any copying, republication or redistribution of KOFIC's content is prohibited without prior consent of KOFIC.
Related People Related Films Related Company Related News