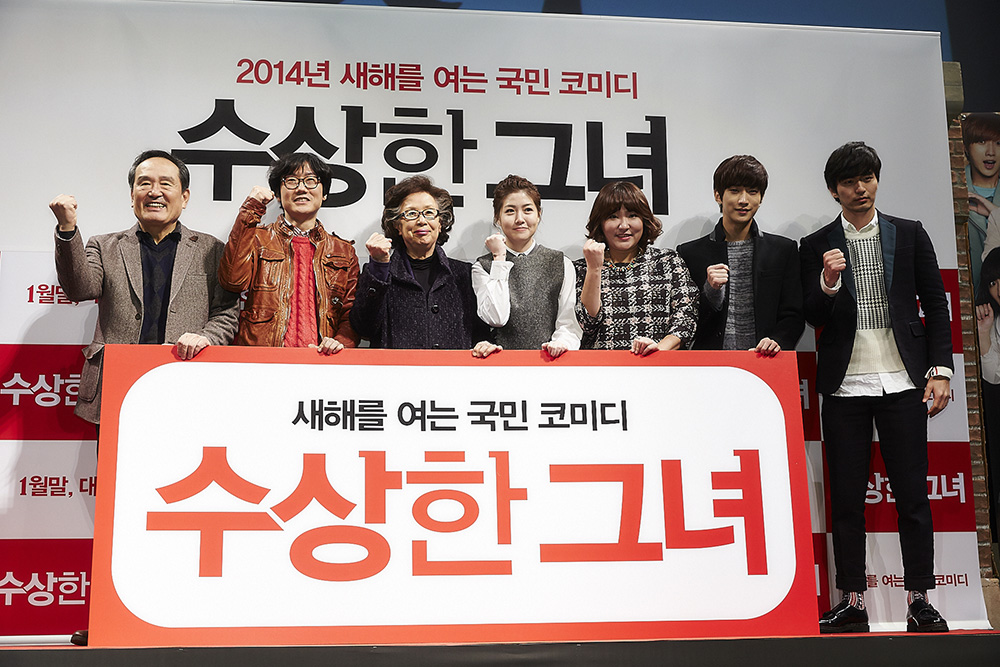 What if a 74 year-old foul-mouthed old lady returned as a young 20 year-old? A press conference for Miss Granny was held at the Apgujeong CGV theater, Seoul on December 16th. The third feature film of filmmaker HWANG Dong-hyuk, who directed My Father (2007)and Silenced (2011) attended the press conference of this family comedy, aiming for theatrical release during the Lunar New Year’s holiday, with NA Moon-hee of May 18 (2007) and Cruel Winter Blues (2006), SHIM Eun-kyoung of Sunny (2011) and Masquerade, and PARK In-hwan of Thirst (2009) and The Quiet Family (1998).
Miss Granny deals with the story of Mal-soon, played by NA Moon-hee, who is transformed into a 20 year-old woman after finding out that her children are trying to admit her into a nursing home and visits a photo studio by chance. When no one seems to recognize her, she introduces herself as ‘OH Du-ri’ and becomes determined to enjoy her youth once again.

The comedy in this film stems from the various situations that arise when a woman who speaks and acts like the elderly Mal-soon lives in the body of the young OH Du-ri. SHIM Eun-kyoung, who gave an outstanding performance as the foul-mouthed teenager in Sunny commented on her role in this film with pride, “I was a bit intimidated by the script when I first read it, but then I realized I had a grandmother-like quality in me. The way I spoke and walked in this film is just like I am most of the time.” Also adding, “This film is quite close to my heart as it is the first film for me to star in not as a child actor, but as full-fledged actress, SHIM Eun-kyoung”. NA Moon-hee also talked about her attachment to her role, “Miss Granny brought out a nature in me that has never been expressed before.”
Director HWANG Dong-hyuk stated his satisfaction with the casting, “Although we followed the principle of star casting from the start, once the camera started rolling we discovered that the two actresses had much in common.”  In addition, he explained, “With My Father and Silenced, I always seemed to be making social films with dark subject matters, but in reality, I am a fun person. This time I really wanted to make a happy and light film.” Miss Granny’s theatrical release is scheduled for January 23rd, 2014.
Any copying, republication or redistribution of KOFIC's content is prohibited without prior consent of KOFIC.
Related People Related Films Related Company