NIGHT OF THE UNDEAD Scares Up Asian Sales

Oct 12, 2020
SF Comedy with LEE Jung-hyun to Be Released in Taiwan, Vietnam and More 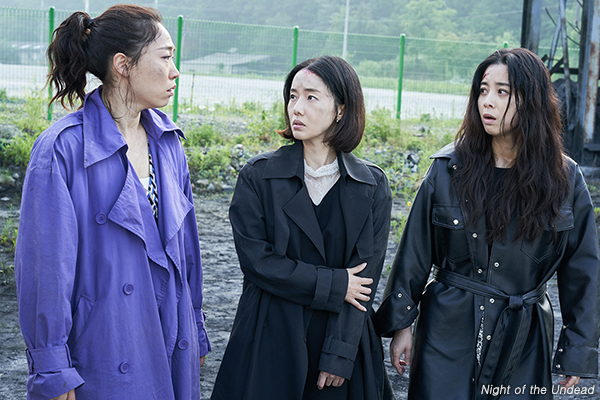 Night of the Undead, a new sci-fi comedy that was released during the Chuseok holidays in Korea, is also gaining attention overseas after production company The Contents ON revealed that the film’s international sales agent Finecut had sealed distribution deals on the picture with six companies in seven Asian markets.
The film will be released in both Taiwan and Vietnam, by Caichang and Lotte Vietnam, respectively, on October 30, while it has also confirmed contracts with distributors in Hong Kong and Macao (Edko Films), the Philippines (Viva Communications), Japan (King Records) and Indonesia (Moxienotion (PT Mitra Media Layar Lebar)). Night of the Undead unique genre elements likely made it an appealing for international buyers, who have been eager consumers of high-concept Korean genre content such as TRAIN TO BUSAN (2016) and this year’s #ALIVE.
From director SHIN Jung-won, a noted purveyor of horror-horror-comedies such as To Catch a Virgin Ghost (2004), Chaw (2009) and Ghost Sweepers (2012), Night of the Undead features PENINSULA star LEE Jung-hyun as a newlywed who begins to suspect that her husband, played by KIM Sung-oh of Unstoppable (2018), may have in fact come from another world with a nefarious purpose in mind. The film also stars SEO Young-hee of Bedevilled (2010) and rapper-actor YANG Dong-keun (aka YDG).
SHIN’s film debuted in local theaters on September 29, just ahead of the holidays and has to date attracted just under 100,000 spectators after charting at number five during the busy Chuseok holiday weekend.
Any copying, republication or redistribution of KOFIC's content is prohibited without prior consent of KOFIC.
Related People Related Films Related Company