Nov 30, 2017
TV Series Jikji, Romance Fantasy Between Past and Present 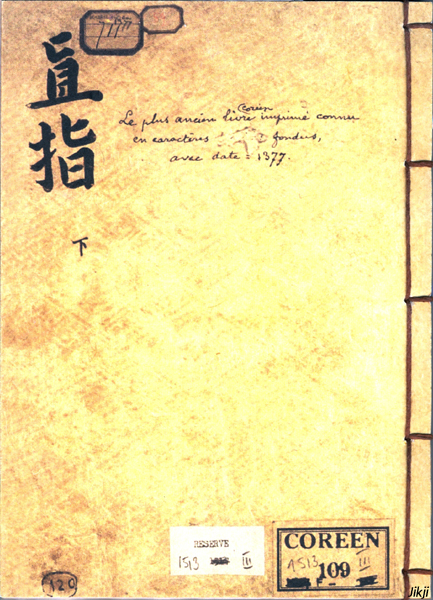 A new TV series will be made about Jikjisimcheyojeol (Jikji), the oldest movable metal print book in the world. Jikji (working title) will be produced by IMTV, the company behind SBS drama series Reunited Worlds (2017) and KBS drama series Spy (2015). The production will be headed by KIM Mi-sook who is known for MBC drama series Kim Su-Ro, The Iron King (2010) and EBS drama series The Count Of Myeongdong (2004). Writer KIM has written more than 10 documentaries about Jikji and metal types for about 20 years, including the MBC documentary Jikji (1995) and Metal Printing Types, The Great Invention (2000). Last year, her idea and draft were selected to receive Historical and Cultural Contents Production Support from the Korea Creative Content Agency (KOCCA). Drama series Jikji will depict the romances and fantasies of the main characters surrounding Jikji, going back-and-forth between the past and the present.
Jikji is the title of a Korean Buddhist document, printed during the Goryeo Dynasty in 1377, predating Johannes Gutenberg’s acclaimed 42-Line Bible by 78 years. In September 2001, UNESCO confirmed Jikji as the world’s oldest metalloid type and includes it in the Memory of the World Documentary Heritage. In the late 19th century, Victor Collin de Plancy came to Seoul as the first French consul to Korea and collected Jikji with other Korean ceramics and old books and since 1950 it has been kept in the National Library of France (BnF). On October 17th, 2011, the National Library of Korea unveiled some parts of Jikji’s original text images through the Korean Old and Rare Collection Information System, according to a memorandum of understanding (MOU) between Korea and BnF.
Any copying, republication or redistribution of KOFIC's content is prohibited without prior consent of KOFIC.
Related Company