Hiroshima Invites BROTHERS IN HEAVEN and THE GRAVITY OF ACTING 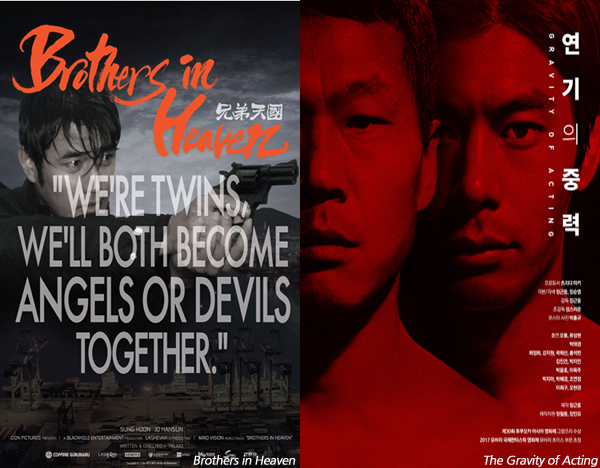 Korean indies BROTHERS IN HEAVEN and The Gravity of Acting have both been invited to take part in this year’s 4th Hiroshima International Film Festival, which takes place November 24-26. Also in the lineup is the short film Jury, directed by former Busan International Film Festival chairman KIM Dong-ho, who serves on this year’s international jury.
Ahead of its Korean release next month, Busan-set crime drama BROTHERS IN HEAVEN is invited to the ‘Special Screenings’ section. The film chronicles the friction between two orphaned brothers, one a cop, the other a gang member, who fall for the same girl. The film marks the third directorial outing for PARK Hee-jun, who previously helmed College Knock Outs (2002) and Mandate (2008). The film’s star JO Han-sun, known for Cruel Winter Blues (2006) and A Better Tomorrow (2010), visits the festival.
In the same section is CHUNG Geun-woong’s directorial debut The Gravity of Acting, which had its premiere at the Yubari International Fantastic Film Festival earlier this year. The film’s leads OH Ryoong and RYU Seong-hyeon shared the Best Actor prize at the Bucheon International Fantastic Film Festival this summer. CHUNG’s work explores the complex relationship between a washed up theater actor and his ambitious junior.
Meanwhile KIM’s short Jury explores a jury’s contentious deliberation process at a film festival. The film originally debuted as the opening film of the Asiana International Short Film Festival in 2012.
Any copying, republication or redistribution of KOFIC's content is prohibited without prior consent of KOFIC.
Related People Related Films Related Company