CJ Succeeds in China with A WEDDING INVITATION 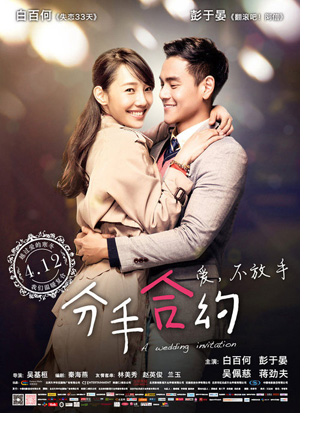 Though many Korean co-productions have been made in recent years, as of yet few have made a significant impact. However, things may be about to change following the blockbuster success of A Wedding Invitation, a new romantic comedy produced by CJ Entertainment.
In its first four days in theaters, the film brought in RMB70.9 million (US$11.5 million). This is only a fraction behind the recent blockbuster Chinese romcom Finding Mr. Right’s RMB76.3 million (US$12.3 million) in the same amount of time, which is currently sitting at number 10 on the all time Chinese chart while still going strong in theaters.
Director OH Ki-hwan (The Art of Seduction, 2005) adapts his own film Last Present (2001) with Chinese stars Eddie PENG and BAI Baihe as the leads. A couple decides to break up to pursue their separate careers, making a promise that they will get back together in 5 years. When the time arrives, the man is about to marry another woman, but his former flame isn’t ready to say goodbye just yet.
A Wedding Invitation marks the first time that CJ has fully produced a film for the Chinese market. With a Korean director as well as other Korean crewmembers (including a producer, the director of photography and the editor), the film has successfully applied the Korean romcom formula to the Chinese market. Given this enormously successful foray into the Chinese market, what next for Korean co-productions?
Any copying, republication or redistribution of KOFIC's content is prohibited without prior consent of KOFIC.
Related People Related Films Related Company