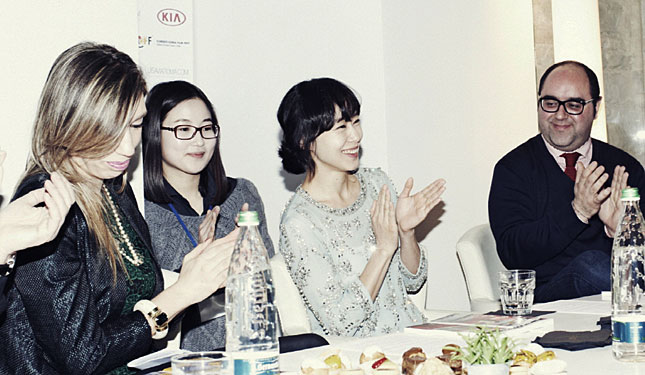 JEON Do-yeon is promoting Korean films at the 11th Florence Korean Film Festival. JEON won the Best Actress award at the Cannes Film Festival in 2007 with Secret Sunshine directed by LEE Chang-dong. She became the first Korean actress for whom a special exhibition was held at the Florence Korean Film Festival. During the event, eight films she acted in, including The Contact, Happy End, Untold Scandal, My Mother, The Mermaid, Secret Sunshine, My Dear Enemy, The Housemaid and Countdown will screen.
JEON attended a press conference on March 18th. Local reporters who gathered at the conference to meet the so-called ‘Queen of Cannnes’ asked her a lot of questions about the films screening at the exhibition as well as her next projects. They also asked general questions about Korean films. There were many requests for interviews after the press conference ended, which showed her status as a world class actress. JEON also showed up at the GV for The Housemaid along with director IM Sang-soo on March 19th.
A representative of the festival said, “As the news that JEON Do-yeon, the ‘Queen of Cannes’, spread, reactions were ecstatic. The local press was very much interested in the special exhibition for JEON, the irreplaceable Korean actress of Korea known across the globe.” The 11th Florence Korean Film Festival will continue until March 24th.