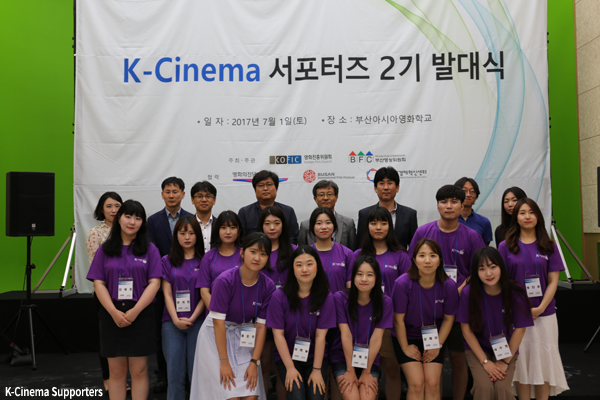 The Korean Film Council (KOFIC) and Busan Film Commission (BFC) held the launching ceremony for the second K-Cinema Supporters on July 1st, 2017. The K-Cinema Supporters program provides job experiences, special seminars and mentoring programs for young people living in Busan to produce short films. Organized by KOFIC and BFC and co-operated by the Busan Cinema Center, Busan International Film Festival (BIFF) and Busan Center for Creative Economy and Innovation (Busan CCEI), K-Cinema Supporters is for college students and jobseekers aged 18 to 30, who want to work in films.
This second group of supporters was recruited from June 1st to 18th. A total of 14 supporters were selected through the judging process and will be provided placements at various film events in Busan, online promotion projects and training and mentoring programs with subject matter experts. This year, it will offer supporters a chance to make and screen short films themselves through mentoring with director KIM Hwi (The Tooth and the Nail and The Neighbors, 2012) and director of photography JUNG Seong-wook (Horror Stories II, 2013 and The Neighbors).
“K-Cinema Supporters can practically help young people in Busan to experience and go on in the film industry.” LEE Sang-seok, Chief Director of the Future Strategy Division of KOFIC, said at the launching ceremony.
Any copying, republication or redistribution of KOFIC's content is prohibited without prior consent of KOFIC.
Related People Related Films Related Company Related News