Various Colors of Korean Cinema at the 37th São Paulo 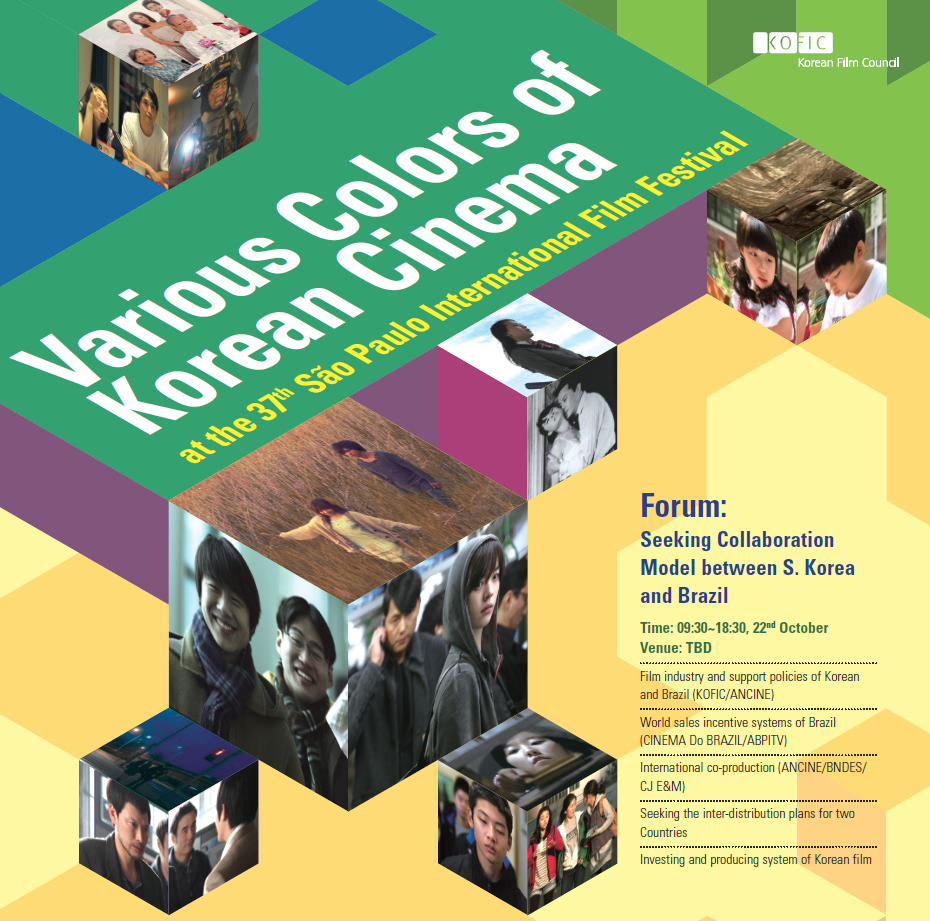 The Korean Film Council (KOFIC, Chairman Kim, Eui-suk) is looking to promote Korean films in the Central and South American market, and this initiative will take place at the 37th São Paulo International Film Festival, to be held on 18th through 31st of October. During this event, KOFIC will stage a Korean rookie directors’ special collection and a Korea-Brazil film collaboration forum.
The São Paulo International Film Festival is among the biggest film festivals in Central and South America, and a major meeting place for the Brazilian film industry, which is developing at a remarkable pace these days.
These events have been designed to introduce lesser known young directors as well as the famous world festival winners to this region of the world, thus allowing KOFIC to develop a new market for Korean cinema. The collection consists of some of the works by promising young directors who have been passionately received since 2011. The screening list shows a wide and interesting variety, including Cold Eyes by KIM Byeong-seo and JOH Ui-seok, JUNG Byung-gil’s thriller Confession of Murder, JO Sung-hee’s A Werewolf Boy and JANG Kun-jae’s Sleepless Night. Short films will also be screened, including Safe, MOON Byoung-gon’s Palm d’Or winner in the short film section at the Cannes International Film Festival this year. In addition, a digitally restored version of the late KIM Ki-young’s The Housemaid (1960), a much appreciated Korean classic, is also in the screening list.
As a part of the supplementary program in the film festival, a film forum will be held on the 22nd, promoting the Korean film industry and seeking collaboration between the two countries, with film professionals from both countries on the panel. In this forum, the panel will discuss the kind of model needed to promote KOFIC and the Brazilian film council’s mutual collaboration and seek ways in which Korean films can be promoted in Central and South American countries and how to encourage co-production and co-distribution. Some of the issues in film promoting policy in both countries will also be examined during the forum. The panel includes HONG Seung-ki, the vice chairman of KOFIC, CHO Kyeong-duk, whose Sex Volunteer has been invited to the festival and who is currently working on a co-produced film between the two counties, and CHOI Yeon-woo from CJE&M, the manager of the international investment production team.
An MOU (memorandum of understanding) will also be agreed upon during the festival, signed by HONG Seung-ki and Manoel Rangel, the chairman of the Brazilian film council, to promote comprehensive collaboration in film between the two countries. In addition, KOFIC will hold a Korean Cinema Night on the 21st to boost networking between film personnel from the two countries.
KIM Eui-suk, the chairman of KOFIC, believes that “this showcase and forum will be important events in expanding the international market for Korean cultural products from existing Japanese and South Eastern Asian markets to the Central and South American market, where the interest in Korean cultural products are notably increasing today.”
Any copying, republication or redistribution of KOFIC's content is prohibited without prior consent of KOFIC.
Related People Related Films