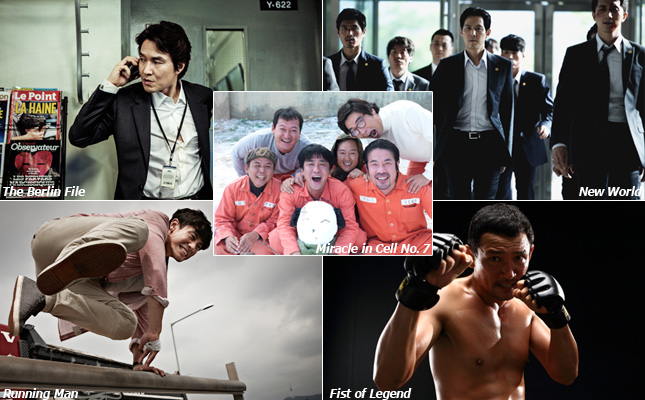 2012 ended with a slew of new records for the Korean film industry but 2013 has gotten off to an even better start, hinting at greater heights to be reached throughout the year.
A varied mix at the marquees powered to industry to 55.6 million total admissions while the local take came in at 38.5 million. Domestic films performed particularly well as they brought in around 50% more viewers than in the first quarter of 2012. In addition to the sheer volume of admissions, Korean films dominated by shutting out Hollywood and other foreign film producers by commanding almost 70% of all ticket sales.
The surprise hit Miracle in Cell No. 7 was the main cause for the industry’s success as it has brought in 12.7 million admissions and counting, while also scaling to number three on the all time domestic chart in the process. A number of other large hits littered multiplexes throughout the chilly winter months, including RYOO Seung-wan’s The Berlin File, which, with over seven million admissions, is now the best-selling Korean action film. Also driving local business were PARK Hoon-jung’s gangland picture New World (4.5 million) and the gangster shaman comedy Man on the Edge (3.8 million). The Inferno blockbuster The Tower, though released last December, brought in 3.1 million admissions in early 2013.
Outside of the main studio’s output, some small features have also had a good run. In particular, O Muel’s Sundance award-winning Jeju massacre film Jiseul crossed the 70,000 admissions mark on Wednesday. Crossing the 50,000 mark is considered a great measure of success for an independent film.
Spring seems set to get a good start as well with blockbusters such as Running Man, Fist of Legend and The Huntresses lined up and ready to conquer theaters.
Any copying, republication or redistribution of KOFIC's content is prohibited without prior consent of KOFIC.
Related People Related Films