KWAK Tae-yong, the VFX Supervisor of TRAIN TO BUSAN and ASSASSINATION

Feb 14, 2017
“The most important thing is making things look natural” 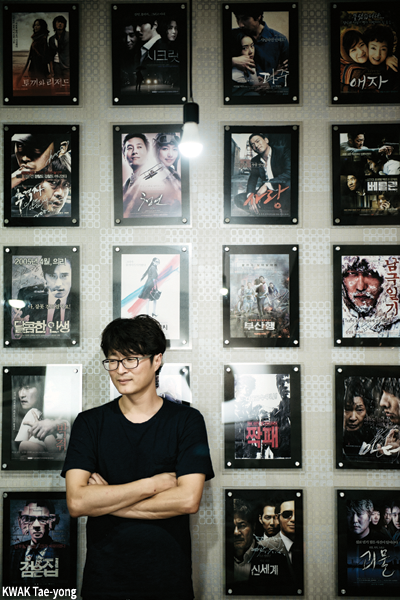 KWAK Tae-yong always describes his work as ‘technical art’ as it covers a vast scope of work which goes beyond simple special effects makeup such as attaching prosthetic material to the face, to tasks of creating dummies and special props and even animatronics. Around 130 films have required his expertise. We asked him a few questions about his journey through the world of VFX.
How did you get into film?
I was always interested in miniatures, and in 2000, I started my career in film by doing miniature work on the film Libera Me.
You founded Technical Art Studio Cell in 2003 and started out in special effects makeup to eventually expand your work in VFX. In general, what kind of changes do you think have occurred during the past 10 years?
The collaboration with computer graphics has expanded the range of expression. If the emphasis in the earlier years was on recreating the same image, now we’ve entered a stage whereby the texture and effects are considered as well. And with the addition of motion to the special effects makeup, we’re able to extend the length of a sequence without any interruption. Technical advancement has also introduced new genres and accordingly new characters such as robots. Nevertheless, there are still so many fields that we’ve yet to cover.
There’s a difference between showing what is realistic and what is genre-oriented. Which do you focus more on?
Creating something to look realistic is a given. However, you also have to consider how the audience is going to accept what is being shown. In the case of horror, you can present something cruel to the extent that it isn’t disgusting or unpleasant. When you’re working on a project, you always have to contemplate the level of what you’re showing and suggest it to the director. Perfectly deceiving the audience shouldn’t be a priority. The most important thing is making things look natural. You shouldn’t create something that stands out.
In that sense, the dummy figure of king Gwanghae (LEE Byung-hun) in Masquerade (2012) created a lot of buzz because no one knew that it was a dummy.
You get a sense of unfamiliarity when you see a real corpse because people are more used to seeing one in a film. It’s ironic that people consider an actor pretending to be dead in a film closer to what a corpse really looks like. So when we were creating the dummy figure of Gwanghae, we gave it a slightly shuddering effect as if the actor was pretending to be dead. I think people accepted this as more natural.

The old age version of YEOM Seok-jin (LEE Jung-jae) in Assassination (2015) is a scene that blatantly declares that special effects makeup has been applied to the actor. I’m sure this weighed heavy on you.
It’s really difficult to work with synthetic skin. We’ve been testing various materials for a long time to upgrade the technology we have, and the extreme results came out in Assassination. I’m rather satisfied with the end results.
Your work requires you to come up with visual effects based on the screenplay. What do you consider most important in your work?
During a discussion after reading a screenplay, you realize that people are painting different pictures. That’s why you constantly need to exchange opinions and adjust your ideas. And through this process, you accumulate experience along with as much references as you can get.
What’s your secret for continuously working with leading Korean filmmakers such as PARK Chan-wook, KIM Jee-woon, BONG Joon-ho, RYOO Seung-wan and CHOI Dong-hoon?
The directors you mention attempt new things. I guess it’s like they satisfy the desires we feel while working on a film. Their work always entails a number of dilemmas, but they also enable us to grow. Fortunately I guess they haven’t been disappointed as they keep working with us. (laughs)
Your work on SORI: Voice from the Heart (2016) was also quite impressive. I’m sure it wasn’t easy to give emotions to a robot.
There was just the description of something ‘attached to a satellite’ in the script. The key point in the film was the robot’s emotional connection to Hae-kwan (LEE Sung-min), and we tried to express the robot’s emotions by making its head move and moderating the speed of its movements.
How did you manage to create your works on large-scaled projects such as Flu (2013) or TRAIN TO BUSAN (2016)?
It’s difficult to prepare large-scaled films in a short time span. Our company’s strong points lie in the fact that we always have 15 full time employees on standby. We are equipped with such infrastructure. And when we have the time, we add additional dummies to our collection of several dozen in our storage.
Most of your work focuses on films that are genre-oriented. Could you name any memorable titles among those that are not in this category?
Not too long ago, we worked on a TV program called Reincarnation commemorating the 20th anniversary of Korean folk rock singer KIM Kwang-seok’s death. We had to create the effect of bringing the late singer back to life through an actor who looked like the musician, especially with the help of special effects makeup. It was a project that I’m extremely proud of.
Do you also work on independent or short films?
When film school students ask for help, we work for free because it’s non-commercial. If there are any props we have that they need, we try to lend it out if possible. I guess the word has gotten out because we’ve been receiving quite a few requests, and often from independent films.
What about overseas projects?
We are getting inquiries from China, Hong Kong, Taiwan, etc. It’s a good feeling as it indicates how much the reputation of Korean films has grown in the field of VFX. Nevertheless, our priority is Korean films.
Any copying, republication or redistribution of KOFIC's content is prohibited without prior consent of KOFIC.
Related People Related Films Related Company