Shamanism has been found in almost all cultural areas around the world, with its practitioner, the shaman, intermediating between the human world and the spiritual world. Korea has its own traditional shaman called “mudang”. Mudang has been a frequent subject of Korean films throughout a wide range of genres including horror, thriller and comedy, and the Korean film industry once saw a rise of a new sub-genre called “Musok (shamanism) film”.
It was in the 1970’s that mudang became a major subject of Korean film, with A Shaman's Story (1972) pioneering the trend. Based on a novel by KIM Dong-ree, one of the greatest novelists in Korean modern literature, A Shaman's Story shows the conflict experienced by Mohwa (YOON Jeong-hee), a local mudang, when Christianity starts to prevail in modern Korean society.
Mudang is often placed as a counterpart of Western culture in Korean films, symbolizing Korean tradition. Eulhwa (1979), based on KIM Dong-ree’s own revision of Munyeodo, the original story of A Shaman's Story, is another example, The mudang, Eulhwa (KIM Ji-mee), has to confront her son who converted to Christian. IM Kwon-taek’s Daughter of Fire (1983), film adaption of HAN Seong-won’s novel is also an important work in the mudang sub-genre. In the film, Hae-jun (PARK Keun-hyong), whose mother is a mudang, becomes possessed by a sprit and that causes trouble in his relationship with his devout Christian wife.
The typical backdrop of mudang films is an isolated place like small island or remote fishing village, where the mudang has a great influence on local people. Along with A Shaman's Story, films like Oyster Village (1972), The Early Years (1977), Divine Bow (1979), and The Placenta (1986) are such examples. In places alienated from modernized social systems, the mudang controls the daily life of people as a dominant figure. However, when a disaster or unfortunate event happens in the village, the mudang is sacrificed or punished for being responsible for the misfortune. 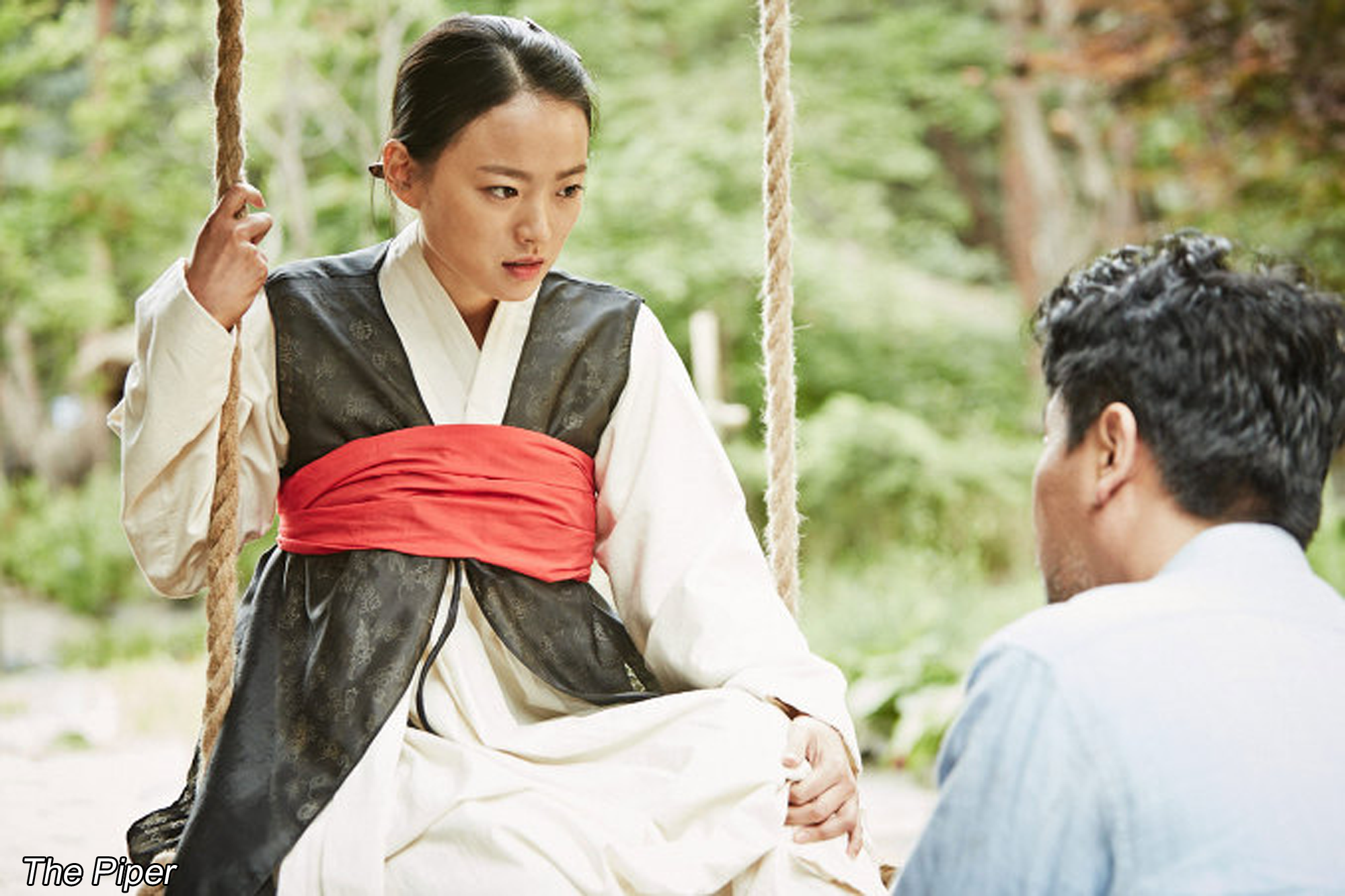 The recently released film, The Piper (2015) also follows this narrative tradition. In the film, a village headman (LEE Sung-min) dominates a remote mountain village that has no interaction with the outside world. Mi-sook (CHUN Woo-hee), a daughter of the village’s previous mudang and now a mudang herelf, is the only person that holds all the secrets of this village full of mysteries. She desperately seeks to escape but is forced to face her tragic end in the village.
One of the key characters in mudang films is a daughter of a mudang. In general, a mudang’s spiritual power is known to be passed on to their children, especially to daughters. The daughters of mudang are portrayed as both ominous and spiritually strong figures in many films such as Whispering Corridors (1998). In the film, Gio (KIM Gyu-ri) is ostracized by her classmates because her mother is a mudang, but her spiritual power provides important clues in solving mysteries at her school.
In some films featuring mudang, mudangs seek dreadful vengeance. In The Hut (1980), a film directed by LEE Doo-yong and invited to Venice Film Festival, a mudang Ok-hwa (Yu Ji-in) intentionally ruins a prestigious family to get revenge for her parents. In the film, the mudang is a revolutionary character struggling against a suppressive patriarchal social system with their supernatural power, whereas So-hwa in IM Kwon-taek’s The Tae Baek Mountains (1994) is a healer that conducts “sitkim-gut” (consoling ritual) to resolve the historical tragedy that resulted from acute ideological conflicts between South and North Korea. 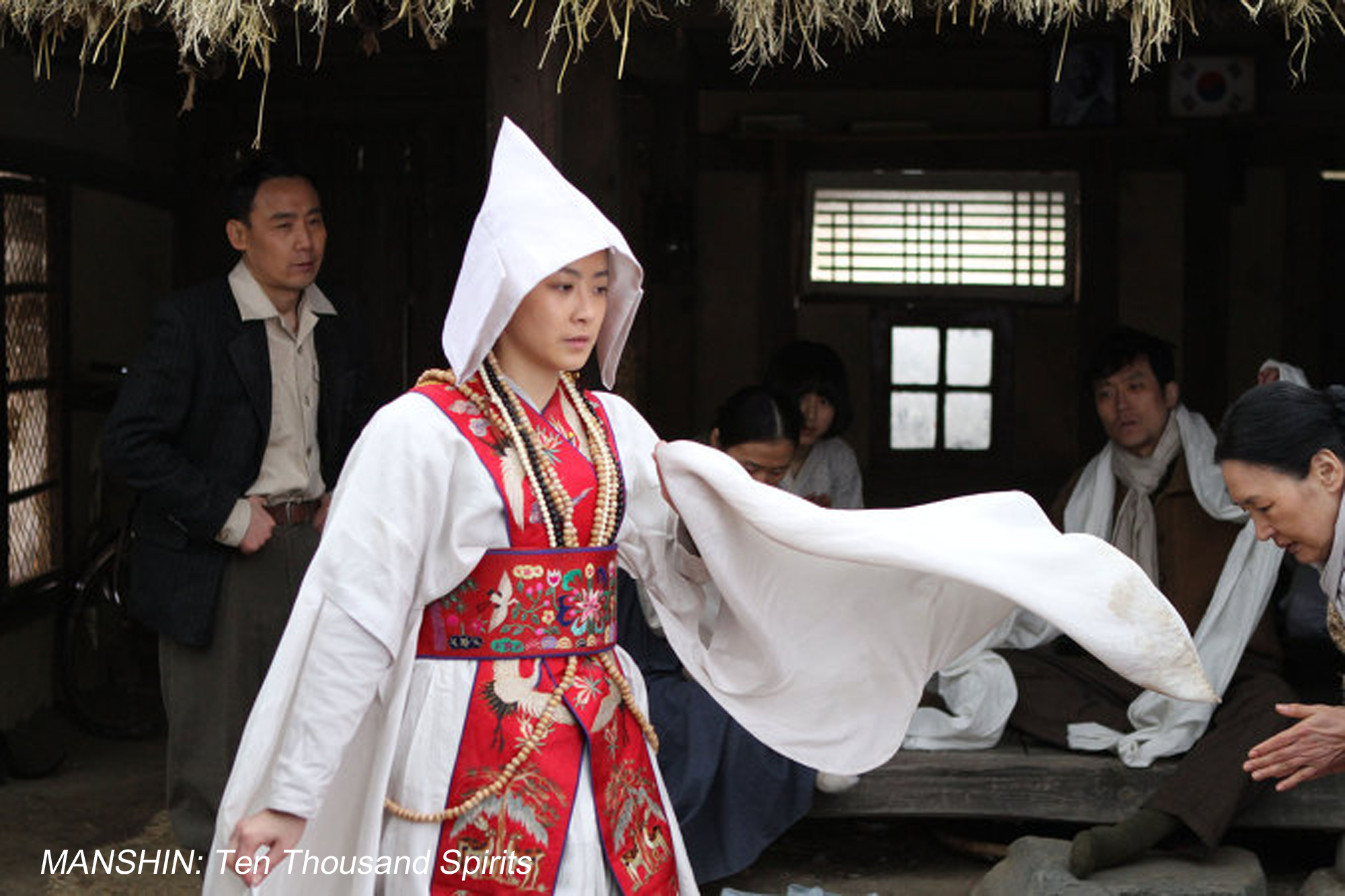 As Korean films have flourished in diversity since the 2000’s, mudang began to reappear in many films from that period. In Man on the Edge (2013), a member of a criminal organization suddenly gets possessed by a sprit and becomes “baksumudang” (male mudang). Fortune Salon (2009) and Ghost Sweepers (2012) are a complete transformation from previous mudang films in that both films are categorized as comedy.
Fortune Salon depicts a romance between a highly successful mudang and a loser guy. In Ghost Sweepers, six shamans from various parts of the country get together to cooperate in solving the mysterious events happening in a remote village. The Classified File (2015), an adaptation of a true story, portrays a fortuneteller with the courage of his convictions playing a key role in solving a kidnapping case. MANSHIN: Ten Thousand Spirits (2013), directed by PARK Chan-kyong, a brother of director PARK Chan-wook, is a mudang film at its finest, revealing the true story of a mudang, in which documentary and fiction are carefully woven into the biography of real life mudang KIM Keum-hwa.
Any copying, republication or redistribution of KOFIC's content is prohibited without prior consent of KOFIC.
Related People Related Films