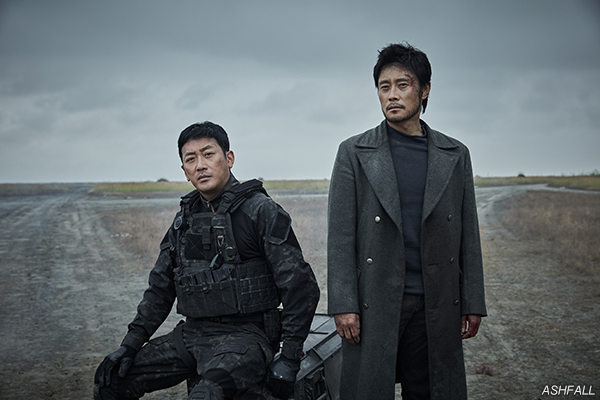 As a pair of major local titles entered the charts, business shot up 75% week-on-week as 3.6 million admissions were registered during the penultimate weekend of the year. Korean films improved greatly on the charts, with the local share rising from 7 to 84%.
Claiming first place this week was the local industry’s most expensive production of 2019, the disaster action-drama ASHFALL, which reportedly cost KRW 27 billion (USD 23.29 million) to produce. Starring LEE Byung-hun, HA Jung-woo, Don LEE, JEON Hye-jin and BAE Suzy, the film was no slouch in its opening, recording 2 million entries (USD 15.17 million) over the three-day frame and a total 2.46 million sales (USD 18.3 million) since its Thursday debut. Initial reactions to the film have been lukewarm but this has yet to impact its run in theatres and reservations remain strong.
Box office magnet Don LEE performed a one-two punch over the weekend, as he also headlines the comedy-drama START-UP, which co-stars PARK Jung-min. The webtoon adaptation scored a healthy 718,000 sales (USD 5.47 million) over the weekend with 1.14 million entries (USD 8.33 million) counted over its first five days. The film has enjoyed a positive response and is well-positioned to play well throughout the end of year season.
Finally ceding its pole position to the competition was Disney’s Frozen 2 which thawed 61% in its fifth weekend, which counted another 349,000 sales (USD 2.6 million). With 12.74 million admissions (USD 91.72 million) to date, the film has now overtaken Assassination (2015) and finds itself at 11th place on the all-time charts. Over the coming days it should also overtake Miracle in Cell No.7 (2013) and The Thieves (2012).
Local animated film The Haunted House: Sky Goblin, The Great Jormungandr entered the charts at number four with 290,000 tickets (USD 2 million) sold over the weekend and 316,000 seats (USD 2.17 million) filled over its first four days.
Closing out the top five was the Hollywood racing drama Ford V Ferrari which decelerated 69% as it cleared another 76,000 admissions (USD 595,000), raising its total to 1.07 million sales (USD 8.09 million).
While ASHFALL and START-UP have plenty of space to bring in big crowds for the last weekend of the year, a pair a major titles are preparing their own assaults on the charts. Despite scoring a flop debut in its native market, Hollywood musical Cats is poised for a sensational opening in Korea and is currently second on the reservations chart. Also opening will be the local historical drama Forbidden Dream from director HUR Jin-ho, which stars HAN Suk-kyu and CHOI Min-shik.
Any copying, republication or redistribution of KOFIC's content is prohibited without prior consent of KOFIC.
Related People Related Films