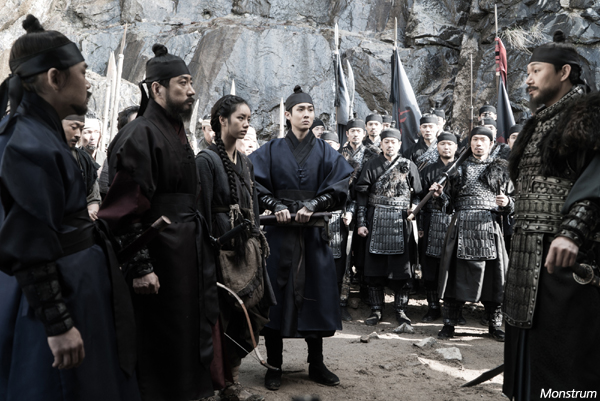 Despite a major new local release hoping to drum up sales, the pre-Chuseok weekend was a quiet one at the big office with a third-week release topping the charts and sales dipping again to 1.34 million admissions. The local industry rallied to 47% but still fell short of Hollywood’s 51% market share.
After climbing to the first rank last weekend, the sleeper hit Searching defied the odds to hang on to the top spot pulling in another 505,000 viewers (USD 4.09 million) as it lost just 35% of its audience. The word-of-mouth smash featuring Korean-American star John CHO has now reached 2.52 million spectators (USD 19.22 million) and is threatening to cross one more milestone before the local Chuseok onslaught.
After clinching first place during its first two days, Korea’s first-period creature feature Monstrum quickly lost steam and slipped to second over the weekend, during which it accumulated a disappointing 421,000 entries (USD 3.3 million). With mixed reactions so far and just 613,000 sales (USD 4.66 million) over its first five days, this pricey VFX-laden production is off to a rocky start.
Still a presence on the charts in its fourth week was the hit romantic drama On Your Wedding Day, which slowed 55% as it added 145,000 viewers (USD 1.15 million), raising its total to a fantastic 2.77 million admissions (USD 20.76 million) to date, placing it over Be With You as this year’s top-selling romantic title.
Opening in fourth place with 98,000 viewers (USD 812,000) was Shane Black’s The Predator, which was well below the already lackluster start of the last entry in the franchise, 2010’s Predators. With just 149,000 entries (USD 1.18 million) garnered since Wednesday, the sci-fi horror is unlikely to progress much further.
Fellow genre entry Upgrade was down 58% as it sold another 37,000 (USD 315,000) over the frame in fifth place, giving it 178,000 admissions (USD 1.46 million) overall.
This week will see three major local titles go head-to-head, each hoping to clinch the Chuseok holiday crown. As of Monday morning, period succession drama FENGSHUI is leading the reservations chart by a razor-thin margin, with big-budget period siege action-drama The Great Battle and hostage thriller THE NEGOTIATION very close behind.
Any copying, republication or redistribution of KOFIC's content is prohibited without prior consent of KOFIC.
Related Films