THE AGE OF SHADOWS Shrouds the Competition 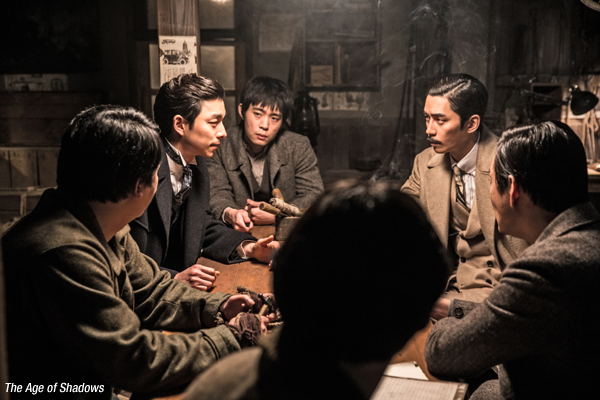 With Chuseok falling on a Thursday this year, Korean exhibitors welcomed a busy five-day holiday weekend which saw 3.91 million tickets sold. 63% of that total was reserved for local releases and despite a number of new titles the charts were commanded by one film.
KIM Jee-woon’s critically-acclaimed Colonial Era action-thriller The Age of Shadows rose 28% to add 2.06 million viewers (USD 15.4 million) to its total which now stands at 6.05 million admissions (USD 44.59 million). Though business is likely to slow down after the holidays the film is well poised to reach the ten million viewer mark.
Hollywood remake Ben Hur had a solid opening with 591,000 tickets sold (USD 4.41 million) over the frame and 894,000 admissions (USD 6.73 million) since its Wednesday bow. Despite the presence of local star LEE Byung-hun, The Magnificent Seven, another Hollywood remake, stalled with 391,000 spectators (USD 2.94 million) during the weekend and 680,000 moviegoers (USD 5.14 million) in five days.
Despite a very small opening last week, Joseon Era drama The Map Against the World saw its fortunes rise this weekend, with a 36% increase giving it a 297,000 viewer weekend (USD 2.18 million). The KANG Woo-suk title now has a 852,000 spectators (USD 6.16 million) in total.
Meanwhile, Alice through the Looking Glass was unable to benefit from a holiday bump as it dipped 15% for another 134,000 ticket sales (USD 973,000) and a new total of 448,000 admissions (USD 3.25 million).
The big new entry on the diversity chart was Woody Allen's Cafe Society, which debuted with a strong 33,000 viewers (USD 259,000) over the weekend and 57,000 entries (USD 440,000) in five days.
Given the slight nature of the coming weekend’s release slate, holdovers appear to set to remain on top of the chart.
Any copying, republication or redistribution of KOFIC's content is prohibited without prior consent of KOFIC.
Related People Related Films Related News