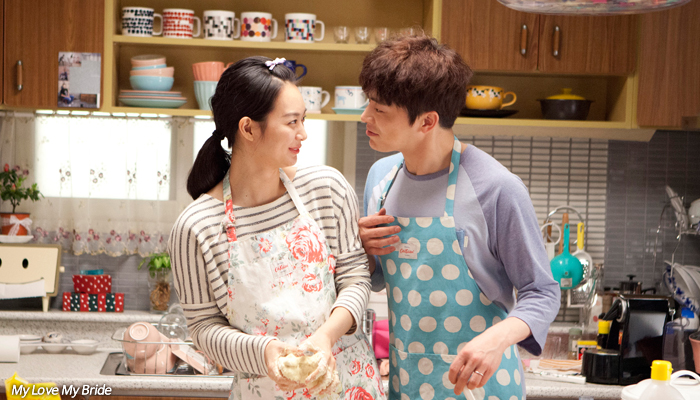 Following the hot summer months and the Chuseok holiday, October was a soft month for cinema attendance, with no major success stories and a string a low-performing titles. There were no true breakouts but most successful was the romcom My Love My Bride, a remake of LEE Myung-se’s 1990 original that managed to scrape over the two million mark in its fourth weekend on the chars. Featuring JO Jung-suk and SHIN Min-a as a recently wed couple whose married bliss quickly makes way for bickering and other marital issues, the film struck a chord with local audiences on the back of its relatable premise and leads.
At number two for the month, with 1.7 million spectators, was IM Soon-rye’s Whistleblower, a hot topic drama about the real story of a shame scientist who claimed to be a pioneer in stem cell research. Featuring PARK Hae-il as an investigative reporter looking to bring the con artist, played by LEE Geung-young, down, the film positioned itself around the same time as recent issue films such as Silenced (2011) and The Attorney, though it failed to harness quite the same amount of outrage.
The top foreign film for the month was Dracula Untold, which scared up 1.2 million admissions. A new spin on the eternal genre staple, with Luke Evans as Dracula, the vampire film, lacking star names and buzz, performed reasonably well, matching its performances in other territories.
A Korean film claimed the fourth slot, as the comedy Slow Video secured 1.17 million tickets. The second film to be fully financed and distributed in Korea by 20th Century Fox (following Running Man) inn Korea, Slow Video exhibited lacklustre returns given the typical box office clout of its affable lead CHA Tae-hyun (My Sassy Girl, 2010). Fox will next foray into the Korean market with the NA Hong-jin directed Gokseong. and subsequently IM Sang-soo’s My Friendly Villains.
Following its impressive run in September was Hollywood’s The Maze Runner, which added 1.04 million admissions to bring its total haul to a powerful 2.79 million admissions, a higher total than expected. Korea was far away the film’s best market outside of the United States.
Close behind was David Fincher’s Gone Girl, after just over a week on the charts. Starring Ben Affleck and Rosamund Pike, the thriller is off to a good start and may make it above two million before long.
Looking at the diversity chart, leading things once again was John Carney’s Begin Again. Which was good enough to clinch tenth spot on the overall chart as well. The film has to date brought in over 3.4 million admissions and Korea is easily the film’s most successful market. With much lower grosses, the US indies Any Day Now and Kill Your Darling, as well as the UK/Ireland co-production Frank, were next on the chart, each with over 20,000 admissions a piece.
Things are bound to take a turn for the better next month as a series of high profile releases begin to flood the market. Christopher Nolan’s sci-fi epic Interstellar and the fourth Hunger Games films will lead the way for the US while Korea will counter with romcom Fashion King, based on the popular webcomic. Reservations for Interstellar are already sky high.
Any copying, republication or redistribution of KOFIC's content is prohibited without prior consent of KOFIC.
Related People Related Films