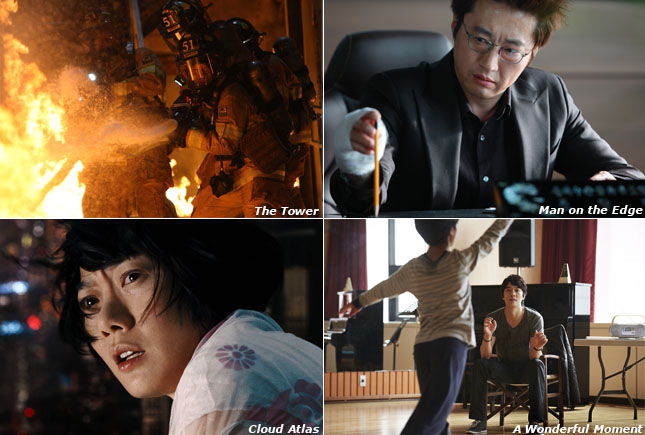 With Korean students on vacation, local theaters continue to attract large numbers of viewers in the first half of January. Leading the pack was local blockbuster The Tower, which added another 2.04 million admissions to bring its overall total to 4.64 million tickets, equivalent to $31.9 million. The film's plot centers around the Christmas-day opening of a massive new twin-towered skyscraper in Seoul. When a helicopter crashes into one of the buildings, a deadly fire begins to rage and the fire department must race to save the people inside. The big-budget film is directed by KIM Ji-hoon (Sector 7, May 18) and features an all-star cast headed by SOL Kyung-gu, SON Ye-jin, KIM Sang-kyung and KIM In-kwon.
Selling tickets at an even faster pace was the gangster comedy Man on the Edge from distributor Showbox/Mediaplex, Inc. Released on January 9th, the film managed to sell 1.47 million tickets in only seven days, boding well for its prospects in the coming weeks. The film stars PARK Shin-yang, KIM Jung-tae, UHM Ji-won and JEONG Hye-young in a story about a gangster who, through a series of misadventures, ends up pursuing a clandestine second career as a shaman. The film is directed by JO Jin-kyu, who back in 2001 directed one of the iconic Korean gangster comedies, My Wife Is a Gangster.
Two Hollywood films that have been nominated for Best Picture at the upcoming Academy Awards placed at #3 and #4 in the chart. Film musical Les Miserables continued its hot streak with another 1.4 million tickets, bringing its total to just under 5 million admissions. It is the first musical in Korean box office history to reach this milestone; previously, the highest grossing film musical in Korea was Mamma Mia! which drew 4,554,785 admissions. Meanwhile Ang LEE's Life of Pi, which was released on January 1, added 906,808 admissions to bring its total to a respectable 1.12 million tickets.
The release of US-German coproduction Cloud Atlas drew widespread press coverage in Korea due to the fact that local actress BAE Doo-na plays a significant role in the film, in her Hollywood debut. Released on January 9, the film ended up taking 364,142 admissions in seven days, placing at #6 in the above chart. Other recent releases include children's animated feature The Reef 2: High Tide, which landed at #7 with 189,729 admissions, and the new Korean drama A Wonderful Moment, which squeaked in at #10 with 158,600 admissions. The latter film tells the story of a director of children's musicals who gets to know a talented half Korean, half-Filipino child as they audition for a major Korean musical that is scheduled to travel to Broadway.
Among specialty releases, two critically praised European films have performed quite well in recent weeks. The Danish film A Royal Affair was released on December 27th, and on a limited number of screens it has managed to sell 15,318 tickets. This is considered to be an impressive total for a film of its size, but even more outstanding has been the performance of Michael HANEKE's acclaimed Amour, which in the weeks since December 19th has accumulated 46,783 admissions. Very few specialty releases achieve this level of success, and the film continues to perform well, with over 1,000 admissions per day recorded on weekdays.