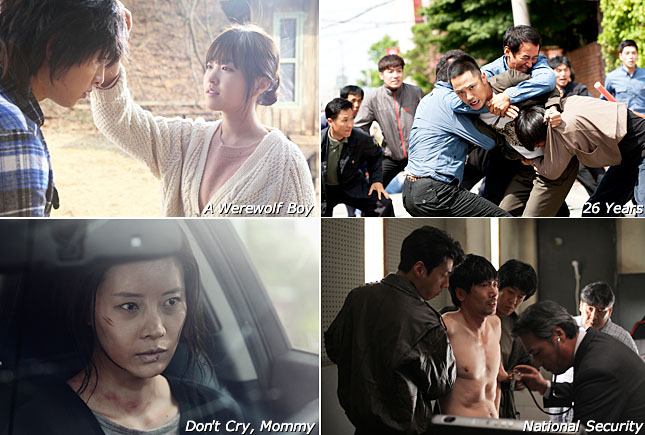 The past two weeks have seen a comparatively balanced division of revenues at the Korean box office, with no one film dominating the market. Sitting at the top of the chart is local box office hit A Werewolf Boy, which took 1,212,471 admissions in its fourth and fifth weeks on release. The film stars SONG Joong-ki and PARK Bo-young in a story of a family in the 1960s who come across a strange boy who initially appears to be a war orphan, but who is later revealed to be something else. To date the film has grossed an impressive 6.6 million admissions.
Opening quite well, meanwhile, was the action thriller 26 Years, which sold 1,108,714 tickets in only a single week on release. Based on a well-known webcomic by KANG Full, the politically contentious work tells the story of a diverse group of people who band together in order to assassinate a former Korean president responsible for the Gwangju Massacre of 1980.
Having collapsed in the preproduction stage two times before, the film was finally able to be completed thanks to an ambitious Kickstarter campaign that attracted 15,000 small donors. The film is the debut work of director CHO Geun-hyun, and stars JIN Goo as a young gangster, HAN Hye-jin as an Olympic sharpshooter, LIM Seul-ong as a newly recruited police officer, BAE Soo-bin as a lobbyist, and LEE Geung-young as a company chairman who all join together in this act of extralegal punishment. JANG Kwang, who plays a similarly menacing presence in Silenced, plays the former president.
Occupying the #3-#5 slots in the chart were The Twilight Saga: Breaking Dawn - Part 2 with 1,061,616 admissions; Don't Cry, Mommy with 919,759 admissions; and Confession of Murder with 795,421 admissions. Don't Cry, Mommy by debut director KIM Yong-han tells the true story of a woman who seeks justice after her high school-aged daughter is gang raped by several of her classmates. Confession of Murder is about a man who publishes a book confessing to a string of serial murders, shortly after the statute of limitations on his crimes has expired. The film stars JUNG Jae-young and has grossed a very solid 2.5 million admissions since its November 8 release.
Meanwhile another critically praised Korean film chalked up mixed results after its first full two weeks on release. CHUNG Ji-young’s National Security, about the brutal torture of democracy activist KIM Geun-tae in 1985, managed to sell only 311,099 tickets despite opening on 300+ screens. This is only a small fraction of the 3.4 million admissions earned by CHUNG’s previous film Unbowed. Nonetheless, given its small budget, National Security was just able to break even, and may end up taking a small profit.
Apart from the DreamWorks animation Rise of the Guardian, the only other new release cracking the top 10 was the comedy EumChi Clinic (literally "Tone Deaf Clinic," official English title not yet available). Directed by KIM Jin-young (Meet the In-Laws), the film tells the story of a vocally challenged woman who, disguising herself as a high school student to get a half-price discount, signs up at "Tone Deaf Clinic." The film grossed 239,420 admissions in its first week.
Closing out the top 10 was Cheolgabang Usussi, a social drama about a man who grows up desperately poor, but who finds meaning in life through helping disadvantaged children. Directed by YOON Hak-ryul (Oh! Happy Day), the film has now been on release for two weeks and has grossed an impressive 63,786 admissions despite a comparatively smaller scale release on 119 screens.
Any copying, republication or redistribution of KOFIC's content is prohibited without prior consent of KOFIC.
Related People Related Films