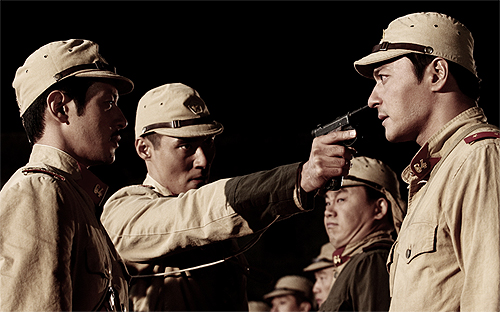 Late December and early January is peak box office season in South Korea, and in past years major hits such as <Silmido>, <King and the Clown>, <200 Pound Beauty> and <Woochi> (to say nothing of <Avatar>) have been propelled to commercial success during this lucrative period. This year, all eyes have been turned to the blockbuster-scale war movie <My Way> by director KANG Je-gyu, who was responsible for such past record-breaking hits as <Shiri> (1999) and <Taegukgi> (2004).
With Korea’s highest ever budget of US$25 million and a cast including major Asian stars JANG Dong-gun, ODAGIRI Joe and FAN Bingbing, <My Way> was expected to dominate the theaters in the weeks following its Dec. 21. The film is jointly released by leading distributor CJ E&M and IT media company SK Planet.
However, it appears that <My Way> may be more vulnerable than many assumed. First of all, <Mission: Impossible - Ghost Protocol>, released on December 15 by CJ E&M, has emerged as a box office force with more than 4 million tickets sold in just 12 days. The film has easily held onto the top box office spot, selling 60% more tickets than <My Way> over the Dec. 22 - 25 weekend.
The unexpected strength of this rival movie has surely dented <My Way>'s returns, but it also appears that many viewers have been disappointed with the film. Popular Internet portals such as Naver and Daum show the film getting average viewer ratings in the 6 - 7 range, which is worryingly low for a film that needs to sell 10 million tickets just in order to break even. <Mission: Impossible>, by contrast, is scoring average viewer ratings of 8 - 9 out of 10.
Although this bodes ill for <My Way>'s investors, it is potentially good news for another Korean film that opened on Dec. 21. <Perfect Game> is a baseball movie based on two legendary real-life pitchers, CHOI Dong-won and SEON Dong-yeol. Although the film’s opening score was comparatively weak, ranking only fifth on this latest chart, <Perfect Game> is generating positive word-of-mouth for the nuanced performances of actors CHO Seung-woo and YANG Dong-geun. With no other major releases scheduled for the next couple weeks, <Perfect Game> will have plenty of time to build its audience and perhaps sell more tickets than it might have done if it had been released during another time of the year.
Any copying, republication or redistribution of KOFIC's content is prohibited without prior consent of KOFIC.
Related People Related Films Related Company