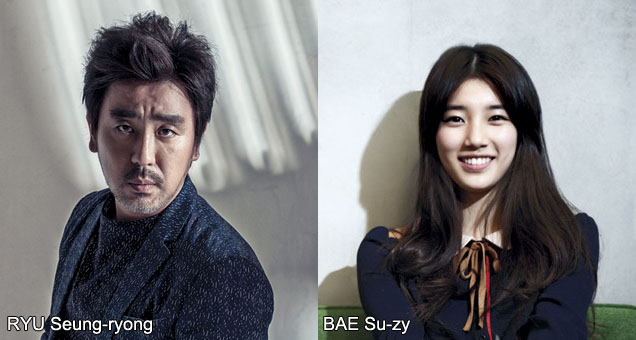 RYU Seung-ryong (Miracle in Cell No. 7, 2012 and The Target, 2014) and Suzy (Architecture 101, 2012) are teaming up as a teacher and a student in upcoming Dorihwaga.
Dorihwaga is a period film based on the real life story of SHIN Jae-hyo, a pansori master and JIN Chae-sun, the first female singer in Joseon dynasty. Dorihwaga is also the title of SHIN Jae-hyo’s pansori, which is a Korean traditional musical storytelling. It is about his favorite student (JIN Chae-sun) and her beauty by comparing her with spring scenery of peach blossoms and plum flowers.
RYU is performing the pansori virtuoso SHIN Jae-hyo, who established a pansori school ‘Dongrijungsa‘ and trained his disciples. Meanwhile, Suzy is playing his favored student JIN Chae-sun. She was grown up in a public house due to financial problems, but she became the first prima donna in Joseon, despite the prejudice that only men could sing pansori.
Expectations are high for the chemistry between the two. RYU is a box office star who is known for his  successes with Masquerade (2012), Miracle in Cell No. 7 (2012) and The Target (2014), while Suzy has emerged as a subject of innocent first love in Architecture 101 (2012).
Dorihwaga is directed by LEE Jong-pil, who previously made Born to Sing (2012). It plans to begin filming in the coming months for a 2015 release.
Any copying, republication or redistribution of KOFIC's content is prohibited without prior consent of KOFIC.
Related People Related Films