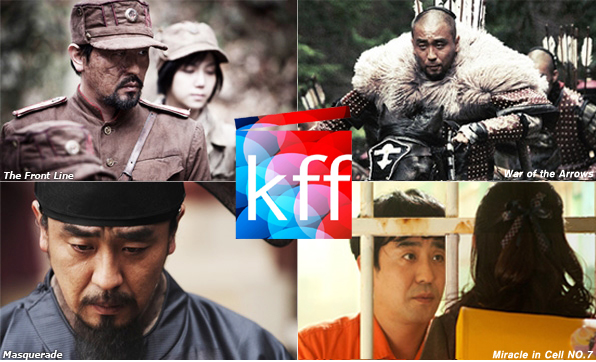 Viewers across Canada will have bountiful opportunities to view Korean films as the inaugural Korean Film Festival is currently screening eight Korean films across five Canadian cities from June 5th to July 10th. This new event is in addition to the established Toronto Korean Film Festival, which recently wrapped its 2013 edition.
The two main focuses at this year’s event will be the films of acclaimed actor RYU Seung-ryong and a look at some of the official Korean entries to the Oscars over the years. Among RYU’s extensive filmography, CHANG Hun’s The Front Line (2011), KIM Han-min’s War of the Arrows (2011), CHOO Chang-min’s Masquerade and LEE Hwan-kyung’s Miracle in Cell No. 7 will screen while the selected Oscar contenders are BONG Joon-ho’s Mother (2009) and KIM Ki-duk’s Pieta, in addition to The Front Line. Also in the roster are LEE Yong-ju’s melodrama Architecture 101 and JO Sung-hee’s fantasy romance A Werewolf Boy.
In addition, a selection of shorts, all originating from the Seoul-based Mise-en-Scene Short Film Festival, will also be featured. The 1st Korean Film Festival Canada began on June 5th and will continue until July 10th in Montreal, Edmonton, Ottawa, Regina and Calgary. In association with Korean Culture Week, the KCC is marking the 50th anniversary of diplomatic relations between South Korea and Canada.
Any copying, republication or redistribution of KOFIC's content is prohibited without prior consent of KOFIC.
Related People Related Films Related Company