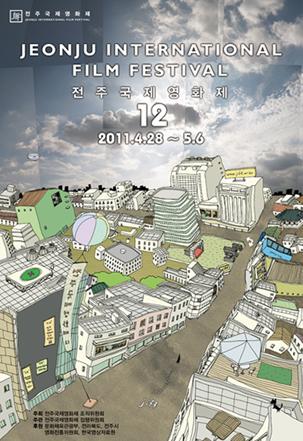 Each year JIFF’s Outdoor Screenings offer the public a chance to enjoy free of charge a selection of all-ages entertaining features on a big outdoor screen under the spring night sky. This year four Korean features and one Japanese feature will be showcased.
Included is 2011’s highly successful Korean feature Detective K: Secrets of a Virtuous Widow by director KIM Sok-yun. The Chosun-set suspense-comedy revolves around a famous detective hired by King Jeongjo to investigate a series of mysterious murders. Released locally in January the film drew 4.8 million admissions at the box office.
The other Korean features are He’s On Duty by YOOK Sang-hyo, a comedy about an unemployed Korean man who passes himself off as a migrant worker from Bhutan in order to get a job; Late Blossom, a sleeper hit about elderly romance from director CHOO Chang-min; and youthful romantic comedy Finding Mr. Destiny by JANG Yoo-jeong.
The fifth feature, Beck by director YUKIHIKO Tsutsumi is a music film about a group of normal Japanese high school students who coincidentally create a band and expand their dreams.
Any copying, republication or redistribution of KOFIC's content is prohibited without prior consent of KOFIC.
Related People Related Films