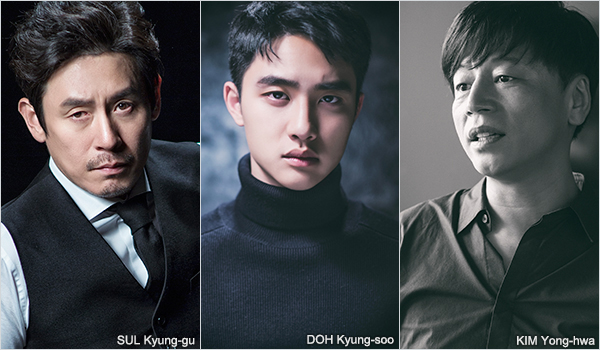 Veteran star SUL Kyung-gu and actor-singer sensation DOH Kyung-soo (aka D.O.) have been offered and are positively considering the leading roles in The Moon (literal title), the upcoming space action-drama from Along with the Gods (2017) director KIM Yong-hwa.
Originally announced as an upcoming KIM Yong-hwa project in the summer of 2018, The Moon will feature SUL as a man on Earth working in an astronomical observatory who by chance discovers that a young man (DOH Kyung-soo) has been stranded on the Moon following an accident. The man on Earth tries to save the stranded man.
SUL Kyung-gu is one of Korea’s most experienced and respected middle-aged male stars, known for LEE Chang-dong classics such as A Peppermint Candy (2000) and Oasis (2002) as well as box office hits like Public Enemy (2002), Silmido (2003), Cold Eyes (2013) and MEMOIR OF A MURDERER (2017).
In addition to his enormously successful singing career with the world-famous band EXO, DOH Kyung-soo has been forging an impressive resume in cinema, with credits that range from Cart (2014) and MY ANNOYING BROTHER (2016) to the Along with the Gods (2017) films and Swing Kids (2018).
Director KIM is known worldwide for his smash hit fantasy films Along with The Gods: The Two Worlds (2017) and Along with the Gods: The Last 49 Days (2018), both of which welcomed well over ten million viewers in Korea. Just like his prior fantasy series, The Moon will be brought to life by celebrated effects house Dexter Studios, the company founded by KIM which also produced and provided the effects for the recent disaster action-drama hit ASHFALL (2019) and is on board to produce The Moon.
The Moon is aiming to go before cameras in the first half of next year, after DOH Kyung-soo’s scheduled discharge from military service in January.
Any copying, republication or redistribution of KOFIC's content is prohibited without prior consent of KOFIC.
Related People Related Films Related Company