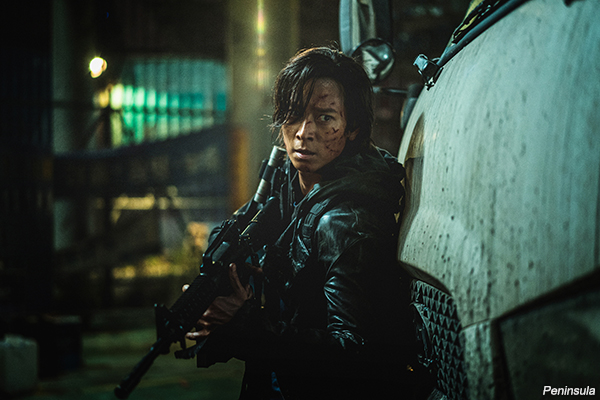 YEON Sang-ho’s TRAIN TO BUSAN (2016) sequel Peninsula has just opened in several Asian markets and is now set to invade North America, where local distributor Well Go USA has announced that it will be released on August 7.
Part of this year’s Cannes selection, Peninsula, which is being billed as ‘Train to Busan Presents: Peninsula’ in North America, will be made available across 150 locations in the United States and Canada. Shudder, the horror streaming service owned by US cable network AMC, will launch the film on their platform in early 2021.
Launched in the Midnight Screenings section of the Cannes Film Festival in 2016, TRAIN TO BUSAN became an international phenomenon as it dominated box office charts in several markets, notching several local records for a Korean film along the way.
Featuring a new cast, Peninsula takes place four years later and sees a Korean national return to the zombie-infested Korean Peninsula on a special mission. The big-budget sequel features GANG Dong-won (Master, 2016), LEE Jung-hyun (Alice in Earnestland, 2015), LEE Re (Hope, 2013), KWON Hae-hyo (The Day After, 2017), KIM Min-jae (The Battleship Island, 2017) and KOO Kyo-hwan (Jane, 2016).
Well Go USA has a long history of distributing Korean titles in North America, including TRAIN TO BUSAN (2016), THE WAILING (2016) and BURNING (2018). Shudder also has experience with Korean titles, having exclusively presented the films Monstrum (2018) and The Wrath (2018) in North America. Craig ENGLER, Shudder’s general manager, related that “Peninsula is one of the most anticipated horror movie sequels of the last decade and exactly the kind of film Shudder members are hungry for.”
Any copying, republication or redistribution of KOFIC's content is prohibited without prior consent of KOFIC.
Related People Related Films Related News