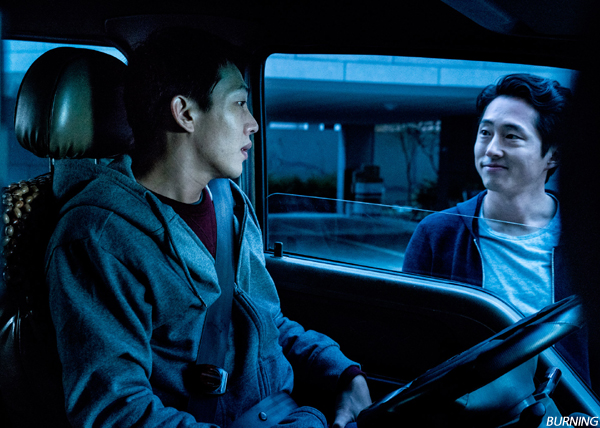 LEE Chang-dong’s critically acclaimed BURNING, which debuted in the main competition of the Cannes Film Festival this year, has been selected as Korea’s official submission to the best foreign language film category of next year’s Academy of Awards, put on by the Academy of Motion Picture Arts and Sciences (AMPAS).
A committee created by the Korean Film Council (KOFIC, Chairman - OH Seok Geun) considered ten titles from the past year, which also included YOON Jong-bin’s espionage drama The Spy Gone North, JANG Joon-hwan’s political drama 1987: When the Day Comes (2017), HWANG Dong-hyuk’s period siege drama The Fortress (2017). films have been put forward twice before by KOFIC - Oasis in 2002 and Secret Sunshine in 2007.
The U.S. leading media ‘playlist’ predicted candidates for the Academy Awards next year. They mentioned LEE’s BURNING as one of the main candidates.
Adapted from MURAKAMI Haruki’s short story ‘Barn Burning’, LEE’s BURNING stars YOO Ah-in as a poor wannabe writer who meets an acquaintance (JUN Jong-) from his childhood by chance and becomes infatuated with her. He takes care of her cat while she leaves on a trip to Africa, from which she returns with another man (Steven YEUN), who confides in him about his secret hobby.
BURNING was LEE’s third film in competition at Cannes, following Secret Sunshine, which earned JEON Do- the Best Actress prize in 2007, and Poetry, for which LEE was awarded Best Screenplay in 2010. BURNING earned the FIPRESCI Prize and the Vulcan Award of the Technical Artist on the Croisette this year.
LEE’s work is currently on the festival circuit and recently screened at the Toronto International Film Festival, and will soon be seen at the New York and Vancouver International Film Festivals, among others.
To date, no Korean film has ever reached the final five nominees in the ceremony’s best foreign language film category or been shortlisted for it. Next year’s Academy Awards ceremony will take place on Sunday, February 24.
Any copying, republication or redistribution of KOFIC's content is prohibited without prior consent of KOFIC.
Related People Related Films Related Company Related News