ALONG WITH THE GODS Turns Its Attention to South America 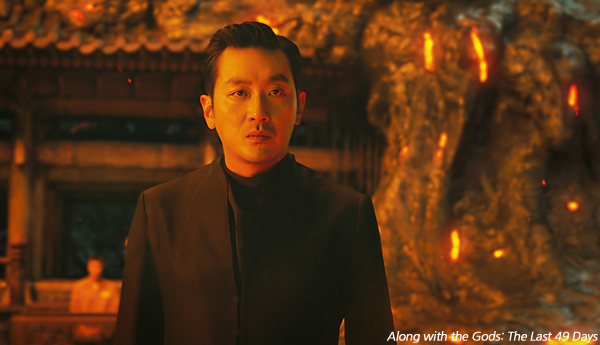 As Along with the Gods: The Last 49 Days lays waste to box office charts at home and across Asia, the fantasy epic and its predecessor Along with the Gods: The Two Worlds (2017) are now looking to add to their list of international conquests, as the pair of films have confirmed theatrical releases in 14 nations across South America starting in September.
The films now hold the number one and two spots for Korean films at the all-time Taiwanese box office and have also proved successful in Hong Kong and Singapore, as well as English-language markets such as the United States, Australia and New Zealand, all of which saw it set all-time best opening weekends for a Korean film.
The first ever simultaneously-filmed two-part film in Korean film history, the Along with the Gods series also became the first instance of two films from the same Korean series topping the ten million viewer milestone. The series comes from hit director KIM Yong-hwa, already known for the romantic comedy 200 Pounds Beauty (2006) and the ski jumping drama Take Off (2009). After establishing the successful visual effects outfit Dexter Studios to help him complete his family sports adventure fun Mr. Go (2013), KIM set his eyes on the Along with the Gods webtoon by JOO Ho-min.
Despite its enormous budget (each installment cost around USD 20 million), the ambitious project immediately met with success when it was released in mid-December last year. The first installment Along with the Gods: The Two Worlds went on to become the second most successful Korean film of all time with 14.41 million admissions while the still in-theaters sequel is hot on its tail with 12.24 million viewers (the tenth rank on the all time domestic chart) and counting.
Any copying, republication or redistribution of KOFIC's content is prohibited without prior consent of KOFIC.
Related People Related Films Related Company