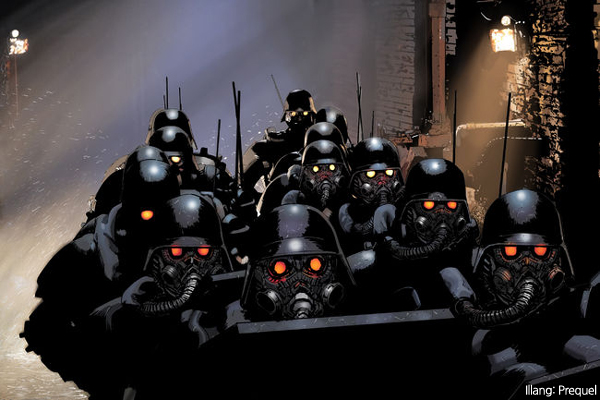 Popular webtoon writer YOON Tae-ho has penned a prequel to KIM Jee- upcoming sci-fi action-drama THE WOLF BRIGADE. Jointly developed by Kakao Pages and Daum Webtoon, ‘Illang: Prequel’ will take place five years before the events of the upcoming film.
An adaptation of OKIURA Hiroyuki’s anime Jin-Roh: The Wolf Brigade, itself derived from OSHII Mamoru’s original manga, THE WOLF BRIGADE takes place in a hypothetical Korean peninsula in 2029 which sees South and North Korea on the cusp of reunification after five years of preparation. A special police unit is set up to put a stop to the anti-reunification terrorist group known as “Sect”.
GANG Dong-won (Master, 2016) plays a member of that squad, known as the Wolf Brigade, who becomes conflicted after witnessing the death of a terrorist, who is the sister of a young woman played by HAN Hyo- (Cold Eyes, 2013). JUNG (Steel Rain, 2017) plays the leader of the Wolf Brigade’s training academy.
Writer YOON is known for several major webtoons that have been adapted as successful films and TV properties. These include KANG Woo-suk’s Moss (2010), WOO Min-ho’s Inside Men (2015) and the hit TV series Misaeng. YOON’s ‘Illang: Prequel’ debuted on the Daum webtoon portal on June 27, beginning a weekly run of chapters that will lead up to the film’s release on July 25.
THE WOLF BRIGADE will be distributed by Warner Bros. Korea and is produced by Lewis Pictures, which was also behind BONG Joon-ho’s Netflix Original Okja last year. WB Korea and Director KIM previously collaborated on the hit Colonial Era spy drama The Age of Shadows (2016).
Any copying, republication or redistribution of KOFIC's content is prohibited without prior consent of KOFIC.
Related People Related Films Related Company Related News