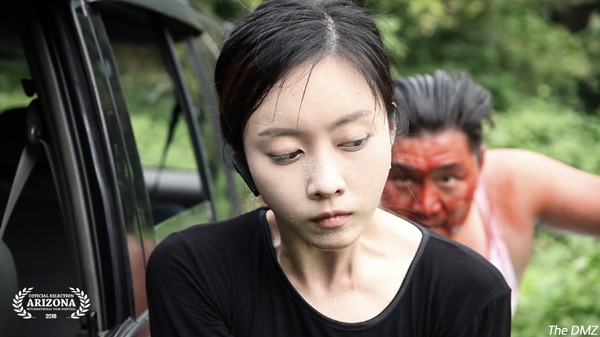 Prolific indie genre filmmaker OH In- has earned the Best Action Feature Award at the recently concluded 27th Arizona International Film Festival for his latest work The DMZ.
Receiving its world premiere in Arizona, The DMZ follows a struggle for survival between a female police officer who steps on a landmine while chasing an escaped convict in one of the most dangerous regions of the world, the Demilitarized Zone between North and South Korea.
Trained at the Korea National University of Arts (K’Arts), OH helmed several well-received shorts, including 2011’s Metamorphoses, before making his feature-length debut with the horror-comedy Mourning Grave in 2014, which earned the NETPAC Award for Best Asian Film at the Bucheon International Fantastic Film Festival (BIFAN).
A year later he released the horror omnibus 12 Deep Red Nights (2015) and in 2016 came the action-comedy Chasing. In the second half of last year, he directed two new horrors, NIGHTSCAPE (2017), which screened at the Montreal World Film Festival, and Very Bad Moon Rising (2017), which earned three awards from the Amsterdam International Filmmaker Festival.
The DMZ stars actress JU Min-ha, who has previously worked with OH on Mourning Grave and NIGHTSCAPE.
The Arizona International Film Festival, which ran from April 18 to 29, also featured the Korean short film Jungmin's Hentai-manga (2016) by KWAK -min.
Any copying, republication or redistribution of KOFIC's content is prohibited without prior consent of KOFIC.
Related People Related Films Related Company