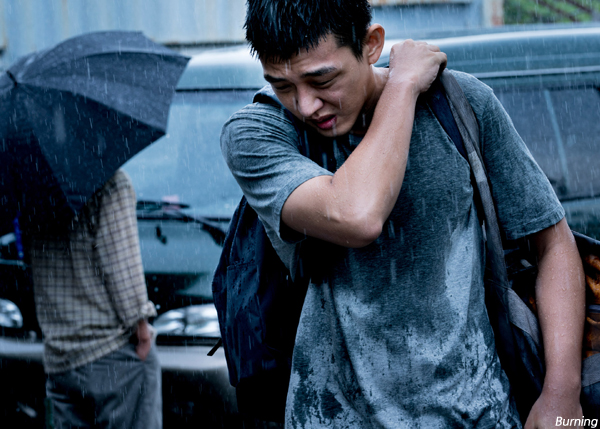 Two features and one short from Korea are invited to this year’s 71st Cannes Film Festival. Director LEE Chang-dong will return to the Croisette with his first film in eight years while YOON Jong-bin takes a midnight slot with his latest film and a short by KIM Cheol- is invited to the Critics’ Week section.
LEE Chang-dong’s Burning, an adaptation of MURAKAMI Haruki’s short story ‘Barn Burning’, has been invited to the competition section of this year’s 71st Cannes Film Festival. It is the director’s fourth invitation to Cannes, and third to the competition section. Burning stars YOO Ah-in (Veteran, 2015), Steven YEUN (Okja, 2017) and rookie actress JEON Jong-.
LEE’s third film Oasis (2002) screened in Critics’ Week in 2003, while Secret Sunshine and Poetry played in competition in 2007 and 2010 respectively. Secret Sunshine earned the Best Actress award for JEON Do- while LEE won the Best Screenplay award for Poetry.
YOON returns to Cannes with his latest film The Spy Gone North, which will feature in ‘Midnight Screenings’. HWANG Jung-min stars as a South Korean spy who infiltrates North Korea in the mid-1990s. The action-drama co-stars LEE Sung-min (The Sheriff in Town, 2017), CHO Jin- (A Hard Day, 2014) and JU Ji-hoon (Along with the Gods: The Two Worlds, 2017). YOON’s debut The Unforgiven (2005) screened in the ‘Un Certain Regard’ program at Cannes in 2006.
The ‘Midnight Screenings’ section has been a fertile ground for Korean genre films over the last few years, which have included YEON Sang-ho’s TRAIN TO BUSAN (2016), BYUN Sung- The Merciless (2017) and JUNG Byung- The Villainess (2017).
Also screening in Cannes this year will be KIM Cheol- short film Exemplary Citizen, joining the Critics’ Week lineup, which highlights work from new filmmakers. The film follows a young man who takes it upon himself to clean up the squalid bathroom of an illegal horse-betting establishment.
This year’s Cannes Film Festival will take place over May 8-19.
Any copying, republication or redistribution of KOFIC's content is prohibited without prior consent of KOFIC.
Related People Related Films Related News