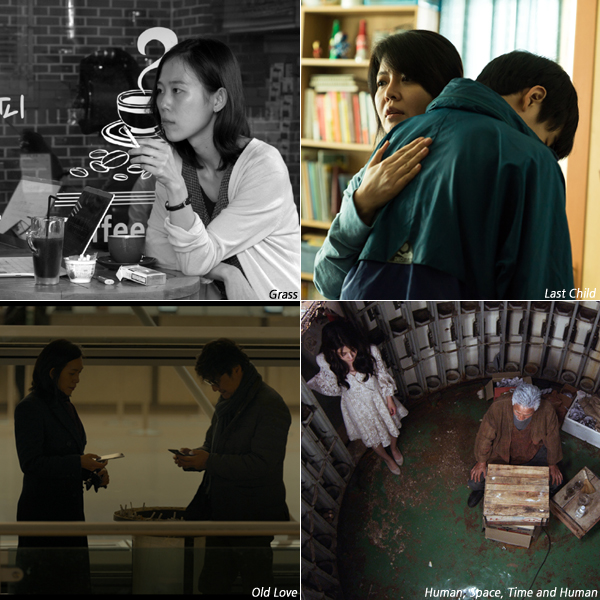 The Forum section of this year’s 68th Berlin International Film Festival will welcome three Korean films, while another has been confirmed for the Panorama Special lineup. Acclaimed director Hong Sangsoo will unveil his latest work Grass there while SHIN Dong-seok’s Last Child and PARK Ki-yong’s Old Love, which both debuted at the Busan International Film Festival last year, have also been invited. Meanwhile, KIM Ki-duk will be featured in Panorama with his latest film Human, Space, Time and Human.
Hong’s 22nd film Grass sees the auteur return to the Forum section of Berlinale, where his first film The Day A Pig Fell Into A Well screened in 1997. He was last featured at Berlinale in 2017 with his 19th film On the Beach at Night Alone (2017) which earned star KIM Min-hee the Silver Bear for Best Actress, making her the first Korean performer to receive an acting prize in Berlin. Hong teams up with KIM again for Grass, which focuses on several guests inside a small café in Seoul. KIM plays a patron who draws inspiration from the people around her for her writing.
SHIN’s Last Child, his debut work, competed in the New Currents program at Busan last October, where it picked up the FIPRESCI Award. The film focuses on a couple who draw close to the boy who was saved by their son on the day he died. Last Child was a recipient of the 2017 Post-Production Fund from the Asian Cinema Fund.
Veteran filmmaker PARK featured in Busan with Old Love, a tale of former lovers who accidentally bump into each other at Incheon Airport. Though decades have passed and their lives have completely diverged, they decide to spend more time together. PARK debuted with Motel Cactus in 1997 and is also known for Camel(s) (2002). Old Love is his eighth feature film.
KIM Ki-duk will be featured in Berlin for the fifth time with Human, Space, Time and Human. He previously won the Silver Bear for Best Director with his 2004 work Samaritan Girl. His 23rd work boasts an all-star cast, including JANG Keun-suk, AHN Sung-ki, LEE Sung-jae, RYOO Seung-bum and Japanese actors Joe ODAGIRI and Mina FUJII, who portray passengers on a warship who wake up after a bacchanal to find themselves floating in the air.
Meanwhile, the short films Come Back Alive Baby by SONG Sang-hee and Strange Meetings, a joint Korea-Denmark production from Jane Jin Kaisen, will feature as part of a group exhibition at Akademie der Künste am Hanseatenweg in Berlinale’s Forum Expanded section.
This year’s Berlinale will take place over February 15-25.
Any copying, republication or redistribution of KOFIC's content is prohibited without prior consent of KOFIC.
Related People Related Films Related Company