ALONG WITH THE GODS Debuted in 1st Place in Hong Kong 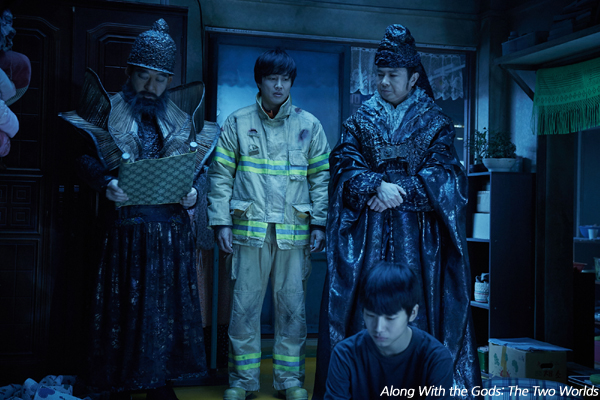 Along with The Gods: The Two Worlds has topped the box office during its first week of play in Hong Kong. The fantasy epic received the widest ever release for a Korean film in the city-state by playing in 51 of the market’s 53 theaters.
The film debuted in HK on January 11, topping the chart far ahead of Pixar’s Coco (in its third week of release) and the Liam Neeson vehicle The Commuter, which also debuted on the 11th. Through January 14, the hit has generated sales worth HKD 12,136,822 (USD 1.55 million).
Back in Korea, the film has been breaking records since its debut on December 20. Along With the Gods: The Two Worlds has to date welcomed 13.04 million viewers (USD 98 million), making it the fourth most well-attended Korean film of all time. The film also topped the box office in Taiwan at the end of last year.
Until now, the most successful Korean film in Hong Kong has been YEON Sang-ho’s TRAIN TO BUSAN, which broke records there in 2016, where it went on to surpass the Hong Kong thriller Cold War 2 to become the most successful Asian film of all time in the market.
From director KIM Yong-hwa, Along With the Gods: The Two Worlds is based on a popular webtoon by JOO Ho-min and stars CHA Tae-hyun, HA Jung-woo, JU Ji-hoon and KIM Hyang-gi. Along With the Gods: The Two Worlds is the first of a two-part series and was filmed at the same time with the second installment which is titled Along with the Gods: The Last 49 Days and is expected to be released this summer.
Any copying, republication or redistribution of KOFIC's content is prohibited without prior consent of KOFIC.
Related People Related Films Related News