ALONG WITH THE GODS Tops Taiwan Box Office 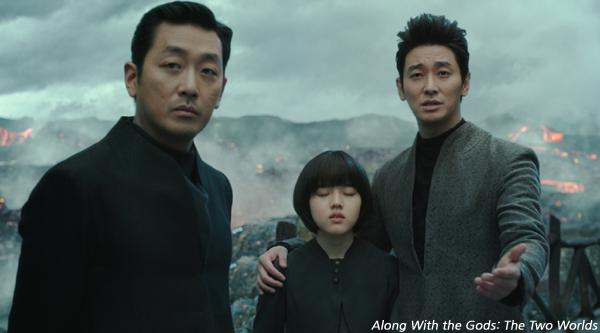 Korea’s year-end chart-topper Along with the Gods: The Two Worlds is also proving to be a strong performer overseas, after topping the box office in Taiwan during the Christmas weekend. The film opened on 80 screens across the island nation and beat out Hollywood heavyweights such as Star Wars: The Last Jedi and The Greatest Showman to take home the weekend crown.
Back in Korea, the film continues to set the box office alight after scoring two first-place finishes. On January 3rd, the fantasy epic became the 16th Korean film to cross the 10 million viewer benchmark, and the second 2017 title to do so, following last summer’s A Taxi Driver.
Elsewhere, the film has also found favor with North American audiences, after accumulating a respectable USD 723,295 from 17 theaters following 11 days of release. Along with the Gods: The Two Worlds was also released in Thailand on December 28th and Vietnam the following day. Next up for the blockbuster are theatrical releases in Indonesia on January 5th and Cambodia, Laos, Hong Kong, Singapore, Malaysia, Australia and New Zealand on January 11th.
From Take Off (2009) director KIM Yong-hwa, Along with the Gods: The Two Worlds is the first installment of a two-part adaptation of the popular ‘Along with the Gods’ webcomic by JOO Ho-min. CHA Tae-hyun stars as a firefighter who dies and is escorted by a group of guardian angels (played by HA Jung-woo, JU Ji-hoon and KIM Hyang-gi) to a series of trials in the after-life.
Any copying, republication or redistribution of KOFIC's content is prohibited without prior consent of KOFIC.
Related People Related Films Related News