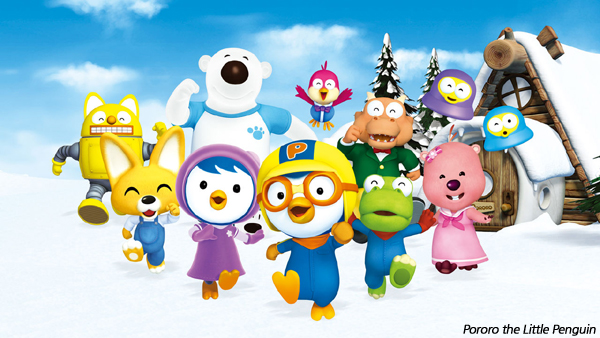 The Korean animated series Pororo the Little Penguin has made his way to Brazilian broadcast TV airwaves. Contents 360, which handles the license for the Pororo brand in Brazil, announced the computer-animated series began airing on Brazilian terrestrial broadcaster RedeTV! from December 18. Founded in 1999, RedeTV! is one of Brazil’s 5 major television networks, and is currently the only Brazilian TV station to produce all of its content in HD. The show airs at 9:00 AM Monday through Friday as part of the station’s children’s programming. Additionally, cable channels associated with the RedeTV! network simulcasts airings.
Contents 360 is a media company that represents Korean content to television stations and media distributors in Latin America. The company is based in Sao Paulo, Brazil with a branch office in Seoul, South Korea. According to their website, Contents 360 also specializes in organizing and facilitating connections within South Korea and Brazil, and their regular partners include TV Cultura, TV Rá-Tim-Bum, Discovery Kids (Latin America), KBS, MBC and Netflix.
This is not the first time that Pororo has been aired in Brazil. From October 2015, Pororo was broadcast on TV Cultura, a state-run, specialized cultural and educational broadcast channel and cable channel TV based in Brazil.
Meanwhile, Pororo, which has grown to become one of the world’s most recognized animated characters since the series 2003 debut, recently released the feature length film Pororo: Dinosaur Island Adventure (2017).
Any copying, republication or redistribution of KOFIC's content is prohibited without prior consent of KOFIC.
Related Company