YOUN Yuh-jung Wins Woman in Film of the Year

Dec 05, 2016
To Receive the Jury Grand Prize from APSAs and Cheval Noir Award for Best Actress from Fantasia 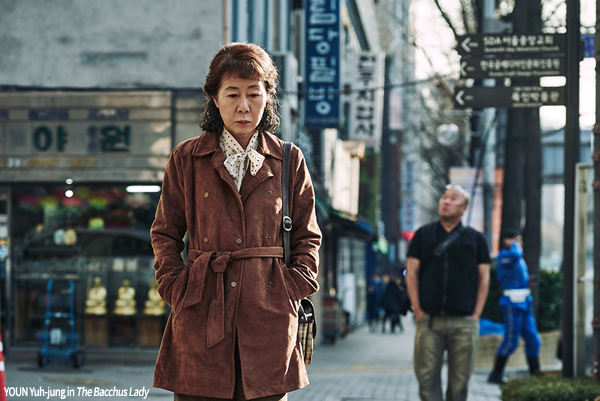 Actress YOUN Yuh-jung has been selected as the recipient of Woman in Film of the Year award at the 2016 Women in Film Korea Festival. Organized by Women in Film Korea, the festival is to note female filmmakers’ works in a year and to share their visions. The selection committee said, “We chose YOUN this year, in recognition of her passion for acting as she is still active, dignified, sophisticated and unafraid of challenge in addition to respects from junior filmmakers.”
YOUN made her debut when she passed the open audition held by the TV network TBC in 1966, and gained attention winning the Best Actress award at the Blue Dragon Awards for director KIM Ki-young’s Woman Of Fire (1971). She is still active in movies and TV series even 50 years after her debut.
YOUN solely starred in The Bacchus Lady in 44 years after Insect Woman (1972). The Bacchus Lady revolves around an old prostitute, So-young (YOUN), who sells her body to old men but begins to euthanize her customers, who want to die due to their fatigued life.
For E J-yong’s The Bacchus Lady, YOUN was also honored with the Jury Grand Prize at the 10th Asia Pacific Screen Awards (APSAs) and the Cheval Noir Award for Best Actress at the 20th Fantasia International Film Festival, Montreal.
Any copying, republication or redistribution of KOFIC's content is prohibited without prior consent of KOFIC.
Related People Related Films Related News