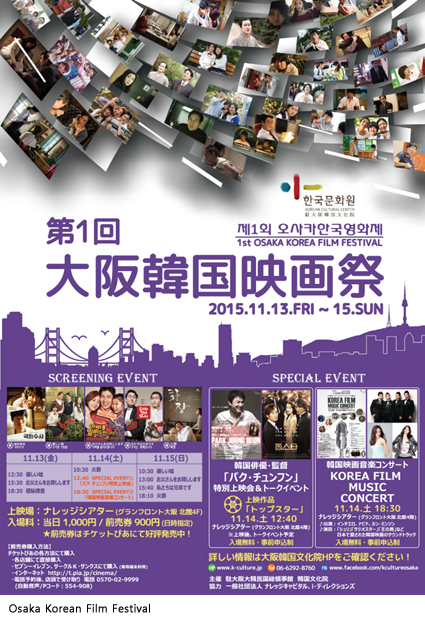 To celebrate the 50th anniversary of restoring Korean Japanese diplomatic relations, a meaningful Korean movie event will take place in Osaka.
The first edition of Osaka Korea Film Festival will be held at Knowledge Theater, 13-15 November. Hosted by Osaka Korean Cultural Center (Tel: 06-6292-8760), Consulate General of the Republic of Korea in Osaka, this festival shall screen 6 films. All of these are released within the last two years, and they are The Classified File (2015), Revivre (2015), Thread of Lies (2014), Dad for Rent (2014), We Are Brothers (2014) and Top Star (2013).
None of these have been ever shown before in Osaka. Osaka Korean Cultural Center explains the aim of the festival as "to show diverse Korean films in Osaka where a lot of Korean immigrants and Hallyu (Korean Wave) fans live."
Many different events will also take place as well as film screening. Among the most popular events would be the Talk Concert where the main characters meet the audience, and Film Music Concert to revive appreciation of the films.
The Talk Concert will invite KIM Yun-seok of The Classified File and PARK Joong-hoon, who is the director of Top Star and also an eminent actor. These two actors will tell the audience interesting anecdotes of these films and their movie life. KIM's The Priests is currently making a great box office success in Korea and his Talk Concert will take place on the 13th after screening, and PARK will appear in his Talk Concert on the 14th.
In the afternoon on the 14th, Korean Film Music Concert will take place, where 10 greatly loved Korean film soundtracks will be played live along with video clips. The list includes When I Dream from Swiri (1999), In-yeon from King And The Clown (2005), Rain and You from Radio Star (2006), Maria from 200 Pounds Beauty (2006), and The Man in a Yellow Shirt from Ode to My Father (2014), sung by Incielo (men's quartet of classical cross-over), KANG Min-sung (a soprano singer), and Navid (a pop singer). Rain and You is to be sung by PARK who is the hero of Radio Star.
Any copying, republication or redistribution of KOFIC's content is prohibited without prior consent of KOFIC.
Related People Related Films Related News