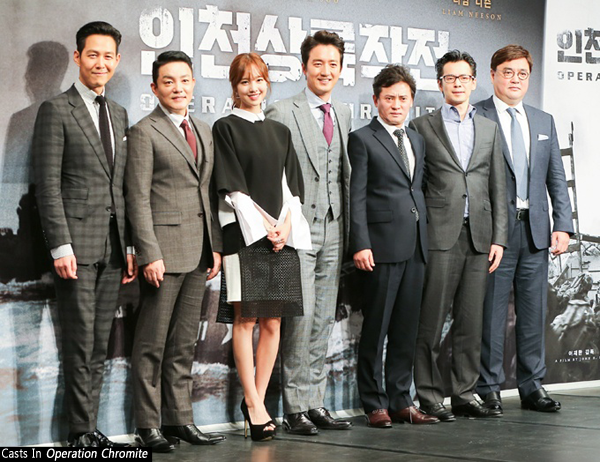 The upcoming Korean War blockbuster Operation Chromite has filled out its main cast, introducing a number of its local stars during a press conference held in Seoul on October 30th. Joining Hollywood name Liam Neeson and previously announced local actors LEE Jung-jae and LEE Beom-su will be JUNG Joon-ho, KIM Byoung-ok, JIN Se-yun and Korean-Japanese MMA fighter CHOO Sung-hoon.
John H. LEE is helming the large scale film for TAEWON ENTERTAINMENT, which will tell of the Battle of Incheon, a military operation that served as a turning point in the War for UN forces.
JUNG, star of the Marrying the Mafia and My Boss, My Hero franchise, will appear as a South Korean military figure while KIM, who famously played YOO Ji-tae’s white-haired bodyguard in Old Boy (2003), will play a barber with a key part to play in the story. New actress JIN is set to feature as a nurse, and CHOO, in his first ever film role, has been cast as a North Korean soldier.
Producer CHUNG Tae-won mentioned during the conference that he came across the story for Operation Chromite while filming 71-Into The Fire (2010), which he also made with LEE. Though not present, action star Neeson, who will play General Douglas MacArthur, sent a video message, stating that he was “excited to start working on this special film,” which will “honor those who fought for freedom and peace.”
Any copying, republication or redistribution of KOFIC's content is prohibited without prior consent of KOFIC.
Related People Related Films Related Company