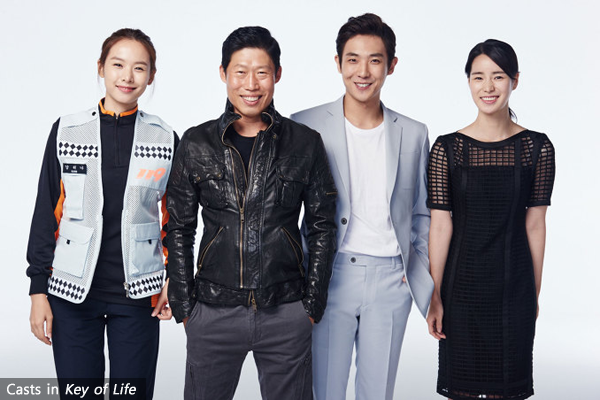 Key of Life which casts actors YOO Hae-jin and LEE Joon began to shoot in September.
Key of Life, based on the Japanese film of same title starring Hirosue Ryoko, Sakai Masato and Kagawa Teruyuki, tells the story of a merciless hit man whose identity is switched by accident with a failed actor on the verge of giving up his life.
YOO Hae-jin who starred in the recent hit, Veteran seen by more than 10 million in the Korean box office plays hit man, Hyoung-wook who ‘wipes out’ his targets in cold blood. He adopts the life of an unknown actor after losing his memory from an accident, but the killer instincts that his body remembers places him in an unexpected series of situations.
YOO Hae-jin on his first day of the film shoot expressed his sentiments, “The film shoot is going smooth thanks to the production team who meticulously prepared every detail from the scriptwriting stage. As the latest Korean comedy that coming out in a long time, I’ll be working hard on my role to bring out the best of this genre.”
LEE Joon who made his debut with Rough Play plays failed actor, Jae-seong whose life is switched with Hyoung-wook’s. LEE and YOO team up with actress CHO Youn-hee playing the bubbly and well-rounded Rina who helps Hyoung-wook suffering from amnesia.
LIM Ji-yeon who won the award for Best New Actress at the 51st Grand Bell Awards and the 23rd Buil Film Awards for her performance in Obsessed plays the mysterious woman Eun-joo who was Hyoung-wook’s target to kill at first but slips off his radar when he loses his memory. High expectations surround the casting of LIM Ji-yeon known for her enigmatic image as the mystifying Eun-joo whose role was never in the original story. The actress has already starred in another period piece, The Treacherous this year.
LEE Gae-byok who directed romantic comedy, The Beast and the Beauty starring RYOO Seung-bum and SHIN Min-a returns after a 10-year break with Key of Life. Regarding this second work of his, “I feel quite confident with this film since we have a good original story and great cast. I’ll do my best to make sure everyone has a good experience” says the director, LEE Gae-byok.
Key of Life is produced by Yong Film Inc. which also produced PARK Chan-wook’s Fingersmith currently in production, and this summer’s box office hit, The Beauty Inside.