THE AVENGERS : AGE OF ULTRON Signs MOU with Korean Authorities 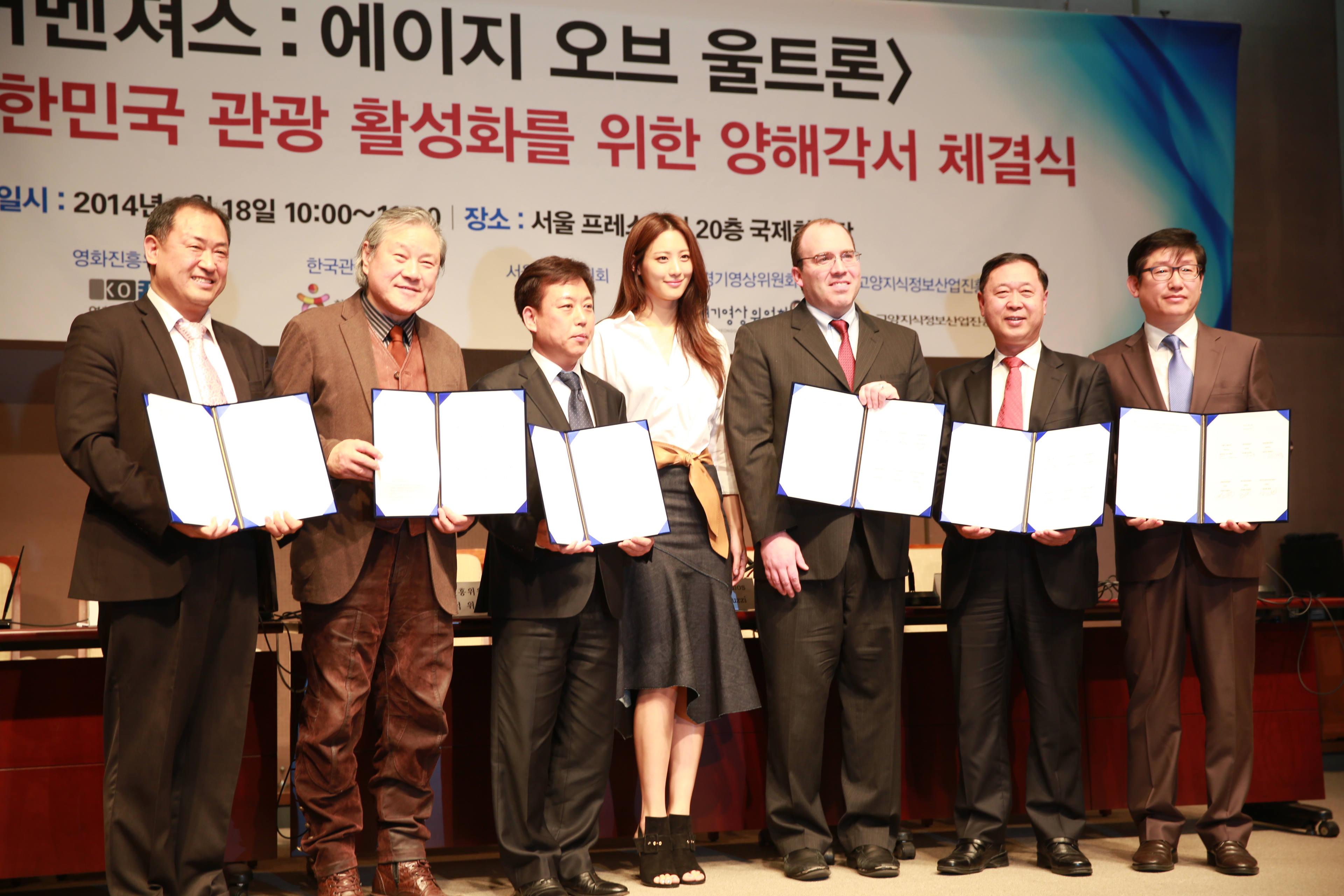 The signing ceremony for the memorandum of understanding between Marvel Studios and related Korean authorities regarding filming of the upcoming blockbuster The Avengers : Age of Ultron was held at the Seoul Press Center on March 18th.

Filming will be conducted around Seoul's Mapo Grand Bridge, Gangnam and Gyeonggi Uiwang from March 30 to April 14 with support coordination from related authorities, including the Korea Tourism Organization, Korean Film Council, Seoul Film Commission, Gyeonggi Film Commisision and Goyang Industry Promotion Agency. Local officials and Marvel Studios chief counsel David Don Galluzzi attended to sign the MOU.
CHO Hyun-jae, the first vice minister of culture, sports and tourism said ”the Korean film industry has reached a new phase. It is important to strengthen international competitiveness as well as to improve of staff labor condition for sustainable development. Filming the Avengers sequel in Korea is beyond any previous level, and will contribute to promote the Korean film industry.“ He gave an example of 35% tourist growth in Thailand due to the movie Hello Stranger (2010).
David Don Galluzzi said, ”The original The Avengers (2012) recorded USD 1.5 billion sales in worldwide. While we were considering perfect locations for a sequel to The Avengers, Marvel head and producer Kevin Feige visited Korea coincidentally last year and was impressed. Furthermore, shooting at this scale will result in inconveniences with traffic control. Seoulites’ understanding and cooperation may be requested. I promise we will make an amazing movie which provide jobs for local staff and help the Korean film industry.“
The director of The Avengers : Age of Ultron, Joss Whedon, and his team visited Korea for location hunting last November, and made the final decision in January this year. In addition, they officially announced filming in February with approval from the KOFIC Location Support Program.
Locations include the Mapo Grand Gridge, Gangnam Grand Road and Chengdam Grand Bridge, and banners, standing signboards and detour bus routes are operated and supported by the Seoul Government and Police Agency. Korean Film Council chairman KIM Eui-suk said “We have offered support for foreign shoots in Korea since 2011. Three years of efforts finally pay off. It will be great to move forward with The Avengers : Age of Ultron.
Any copying, republication or redistribution of KOFIC's content is prohibited without prior consent of KOFIC.
Related People Related Company