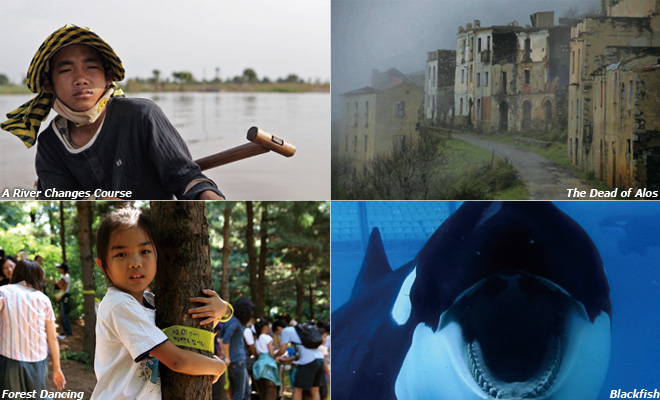 The 10th Green Film Festival in Seoul has announced the winners for its grand prizes. The grand award was given to A River Changes Course by director Kalyani MAM. The jury said, "We gave the film high points for portraying the crisis and pains experienced by those living by the Tonlesap River in an elegant way making full use of space." Director Kalyani MAM sent a thank you speech via video and said, "It is such an honor. The film is about all of us living in the fast-moving pace of globalization. We are all trying to find a balance between preservation and development. I hope to share a feeling of such changes in life with those living in Korea."
The award for the best short film went to Daniele Atzeni who directed The Dead of Alos. It portrays the effects of modernization on a village using archive footage and the jury highly praised the message of the film as well as how it was delivered through the film.
The Jury's Special Award was given to director KANG Seok-pil's Forest Dancing. The film focuses on a community in downtown Seoul as they live around Seongmi Mountain. It depicts their struggle to save the mountain and the jury said that the documentary shows a sense of passion and sacrifice. Director KANG said, "It was an honor just to make it to an international film festival but to win an award is even more of an honor. I made a film about many people's struggle but I hope to make a happier film next time and come back to this festival. I want to thank all of those living by Seongmi Mountain as well as those at this festival. The Audience Award went to Gabriela COWPERTHWAITE's Blackfish.

Meanwhile, the Best Korean Film Award was given to Paldang which is film at the forefront of the documentary genre, portraying the meaning of earth and agriculture. The jury highly praised it for its lengthy period of shooting as well as excellence of editing and its message of people and the environment having to co-exist. Director KAUH Eun-jin said, "The film is about those in organic farming who were forced to leave their land due to the government's Four Rivers Project. I hope this film will help with their struggle." The runner-up prize was given to CHA Jea-min's Fog and Smoke.
The Audience Jury's Award was given to LEE Jong-Hyuk and KIM Hye-Jung's A Story about a Dog You Abandoned which was praised for giving the audience a chance to think about life that is being thrown away and also for being a film that crosses generational lines. The 10th Green Film Festival in Seoul will continue until May 16.
Any copying, republication or redistribution of KOFIC's content is prohibited without prior consent of KOFIC.
Related People Related Films