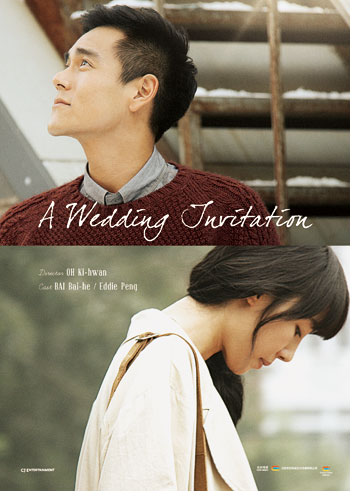 Director OH Ki-hwan's Korea-China co-production A Wedding Invitation which will open on April 12, has begun promotional activities for the region.  A Wedding Invitation is a co-production planned by CJ E&M and Korean crew members including director OH Ki-hwan of Last Present and The Art of Seduction made it along with production companies in China. China's national distribution company, China Film Group (CFG) is to give it a wide release in April across China.
The film centers around a chef and a crockery designer who have been waiting long to have a relationship. It's a sad love story capturing the moment they confirm their love for each other soon after which they are fated to part. It's a melodrama which is rare in the Chinese-speaking world and stars a big star from the region. From Korea, along with director OH Ki-hwan, the director of cinematographer from Haeundae KIM Young-ho, director of lighting, HWANG Soon-wook from The Yellow Sea as well as director of music from Architecture 101 LEE Ji-su and editor SHIN Min-kyung from The Thieves are taking part in the project. Art direction will be overseen by Jeffrey KONG of Malaysia who worked on Lust: Caution.
CEO Julian JUNG of CJ E&M said, "it's a film that has been completely localized for the Chinese-speaking region which had the participation of Korea and China from the development stage and we expect the film to garner good responses across Korea."
Any copying, republication or redistribution of KOFIC's content is prohibited without prior consent of KOFIC.
Related People Related Films Related Company